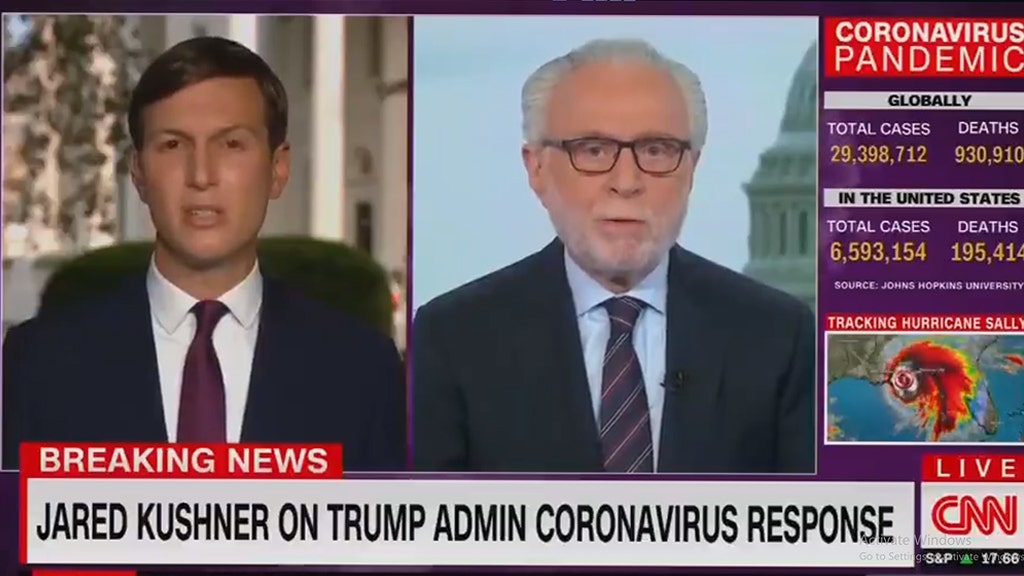 Jared Kushner had a fiery response to CNN’s Wolf Blitzer when pressed by the anchor about the potential health risks from Tuesday’s White House event commemorating the historic Middle East peace agreement.

Following the ceremony, which was attended by hundreds of guests at the White House lawn, Kushner, the president’s top aide and son-in-law, was grilled about whether he and top members of the Trump administration should “set an example” amid the pandemic.

Kushner stressed that nearly all of the events held by President Trump are set outside, encourage attendees to wear masks, and that people have the “First Amendment right… something that CNN has vociferously argued for.”

“At the end of the day in America, we still have to figure out how we live our lives,” Kushner said. “We’re all not going to lock ourselves in our home because of the pandemic. I think we know a lot more today, we know who’s at risk, we know how to mitigate the risk, and we’re all going to act accordingly.”

“But as you know, almost 196,000 Americans have died from coronavirus over these past six months or so and that number could potentially double by January 1 unless dramatic action is taken,” Blitzer pushed back. “And once again, the president sets an example for the American public. Don’t you think to save lives, he should be doing more as an example.”

The White House official cited the decreasing rate of coronavirus deaths and how governors are also taking action in their own states, but also mentioned the “almost 50,000,000 people” who lost their jobs because of the lockdowns.

“People thought that we’d be at 20 percent unemployment now, but thanks to the financial interventions the president has made, we’re at about 8.4 percent,” Kusher told Blitzer before pointing to the increase in suicides and overdoses. “Lockdowns kill people, too, and at the end of the day, again, this is an unprecedented global pandemic. President Trump has worked with his advisers and he’s worked to come up with what are the right mix of policies and prescriptions to make sure that we can both save lives, save our economy, and allow people to move forward. And I think that’s what we’ve done.”

“It’s still very worrisome to see all those of folks so close together, even if they’re outside, not wearing masks, not social distancing,” Blitzer doubled down on the pandemic concerns.

Kushner, though, called out what he suggested was the network’s double standard.

“I will say, Wolf, I didn’t hear you and CNN being that worried when you saw people out there, you know, doing protesting in different ways,” Kushner fired back, referring to the Black Lives Matter protests that have taken place nationwide over the past several months.

“We were plenty worried about that as well,” Blitzer defended his network’s coverage before pivoting to another subject.

CNN flooded its coverage of the White House event on Tuesday with a primary focus on the potential for the ceremony of being a super spreader of the virus rather than the significance of the peace deal.

CNN has had a history of downplaying Trump’s recent foreign policy accomplishments. Last week, the anti-Trump network completely avoided coverage of the announced Israel-Bahrain peace deal during its primetime lineup.

“Wonder why he wants a Nobel Prize so badly? … Oh, you know who has one, right? President Barack Obama!” the CNN anchor boasted.

Lemon’s colleagues Anderson Cooper and Chris Cuomo avoided the subject altogether, as did their primetime competitors on MSNBC.

Christopher Scalia: My father's relationship with Justice Ginsburg – 'best of...

Dense Fog Advisory issued September 21 at 2:59AM PDT until September...

Miley Cyrus says upcoming election is the most important in her...