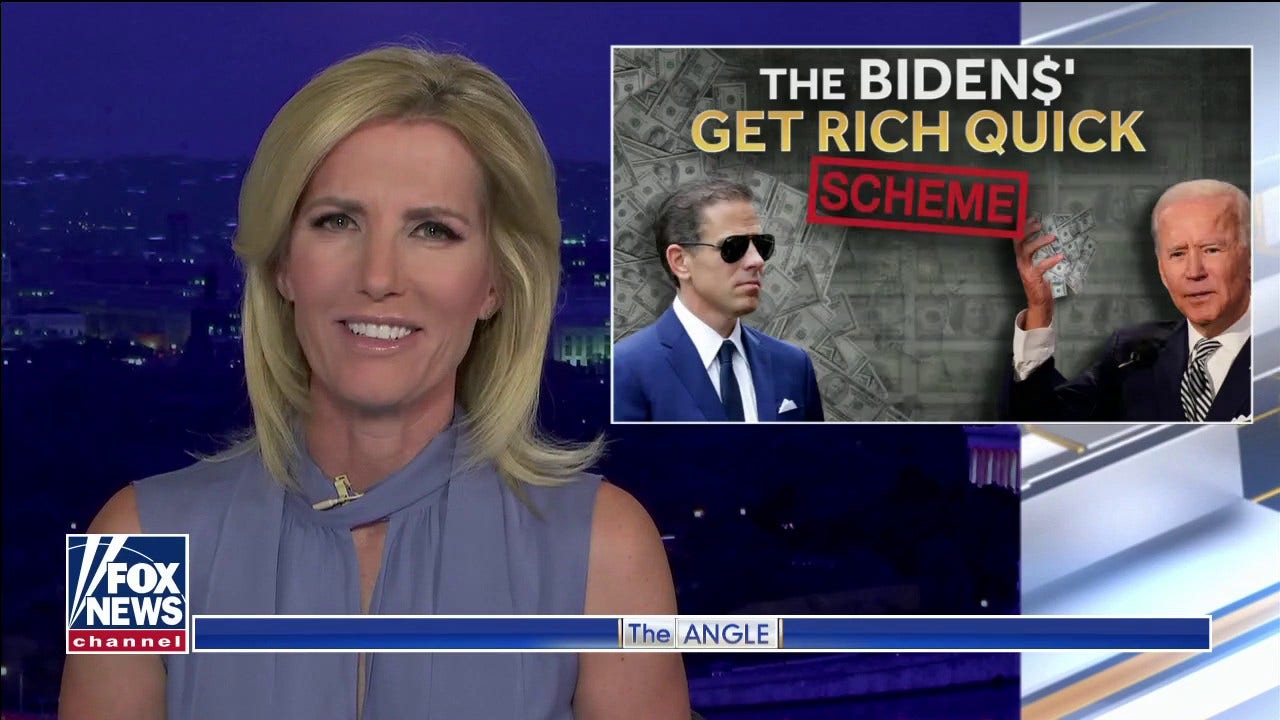 Americans should be alarmed by the fact that the family of Democratic nominee Joe Biden appears to be “knee-deep in sleaze,” Laura Ingraham argued Thursday night.

“People like the Bidens — and the Clintons for that matter — they don’t have to take formal bribes,” explained “The Ingraham Angle” host. “There is no need for any smoking gun. They simply do everything possible while in office to help rich people and to fight off movements … that would force big business to pay higher wages.”

Ingraham added that “during the years between 2000 and 2016, a lot of middle-class folks wondered, ‘What happened to our good-paying jobs and wages? … What happened to all the prosperity we were supposed to see from allowing China into the World Trade Organization? If you look at the Bidens and the Clintons’ paydays, well, you can see where some of that money went.”

Ingraham noted that one purported email uncovered by the New York Post showed Hunter Biden demanding a Chinese oil tycoon pay $10 million for introductions with people like his father, then the vice president.

She went on to note that while Biden has a fundraising advantage over Trump, much of the Democrat’s money is not coming from the average voter.

“Goldman Sachs, Morgan Stanley, JPMorgan, Bank of America, CitiGroup [are giving] almost twice as much money going to Biden than it is going to Trump,” Ingraham said.

“He’s [Biden’s] always been one of the top benefactors of Wall Street’s largesse. It’s been going on for decades. But this year? Up against the populist incumbent, economic nationalist Donald Trump, the spigots of Wall Street have really opened up: Billionaires there feel very threatened by Trump because he is trying to drain the very swamp that they got so rich filling.”

That’s what fuels the opposition of the Washington establishment and the mainstream media, Ingraham concluded.

“No one in the D.C. establishment actually believes that Trump is a racist or a fascist or Russian mole. They don’t think he’s going to tear down democracy or blow up the world or destroy the Constitution. They certainly don’t think that an old hack like Biden is going to save us from COVID or anything else,” she said.

“The establishment just wants Trump and his movement out of the way so they can go back to doing what they do best: Making it easier for rich people around the world to take advantage of America’s middle class.”

Liz Peek: 4 ways Trump can win the debate and the 2020 election

Schumer says he and Feinstein had a ‘serious talk’ after Barrett hearings: report

Coastal Flood Statement issued October 21 at 6:27AM EDT until October...