Forecasters were tracking six tropical disturbances on Wednesday evening, including one in the Gulf of Mexico that has a high chance of forming over the next week, according to the National Hurricane Center 10 p.m. update.

Tropical Depression Sally was among those disturbances, still moving over Alabama as of Wednesday night, while Tropical Storm Vicky was located over the eastern Atlantic Ocean.

Hurricane Teddy was located over the central Atlantic and is forecast to weaken slightly before it likely intensifies into a major hurricane.

Here is what we know about the disturbances and if they’ll strengthen throughout the week.

A low-pressure system over the southwestern Gulf of Mexico now has a 70% chance of forming into a tropical depression by this weekend, forecasters said.

Forecasters cited upper-level winds as the reason for a likely development. 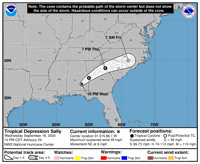 Forecasters said Sally was moving inland 30 miles west south southeast of Montgomery, Alabama and headed toward the northeast at 9 mph. The depression is expected to move in that same direction at a slightly faster pace through Thursday, when it reaches Georgia and South Carolina.

Sally could dissipate some time this weekend. The system’s current winds are at a maximum speed of 35 mph.

Despite Sally losing its power, NHC still warned of heavy rains and flooding in the southeastern U.S., particularly in Alabama and the Florida panhandle. 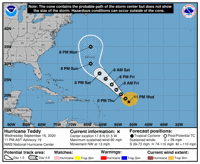 With maximum sustained winds already at 90 mph, Hurricane Teddy is forecast to grow even stronger into a major hurricane by Thursday or Friday.

The Category 1 storm was about 670 miles east northeast of the Lesser Antilles and moving northwest at 13 mph. NHC said they expect Teddy to continue to move in that direction through the weekend.

At this time, there are no warnings or watches issued because of Teddy, but life-threatening surf and currents are likely for the Lesser Antilles, Greater Antilles, the northeastern coast of South America, the Bahamas, Bermuda and the U.S. east coast. 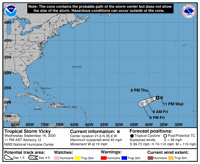 As the system continues to move west and then west southwest, forecasters said Vicky will weaken into a post-tropical cyclone by Thursday.

There are no warnings or watches in effect for this storm.

A disorganized system a few hundred miles south of Cabo Verde Islands has a 60% chance of becoming a tropical depression over the next five days, forecasters said.

It is expected to move west northwest at 10 to 15 mph for several days.

The area of low pressure a few hundred miles east northeast of the Azores is less likely to develop during the week, according to the NHC’s Wednesday evening update.

The system’s chance of forming in the next five days is at 10%, with forecasters saying the chances of it gaining subtropical characteristics by the time it reaches Portugal’s coast have decreased.

It is moving east southeast, but will soon shift to moving northeast, at 10 mph.

Running out of names

The next named tropical storm will be Wilfred, which is also the last name left of this hurricane season.

Any storms after that point will be named after letters of the Greek alphabet, with the first four letters being Alpha, Beta, Gamma and Delta.

Kim Kardashian poses in a snakeskin-print bikini as she goes for...