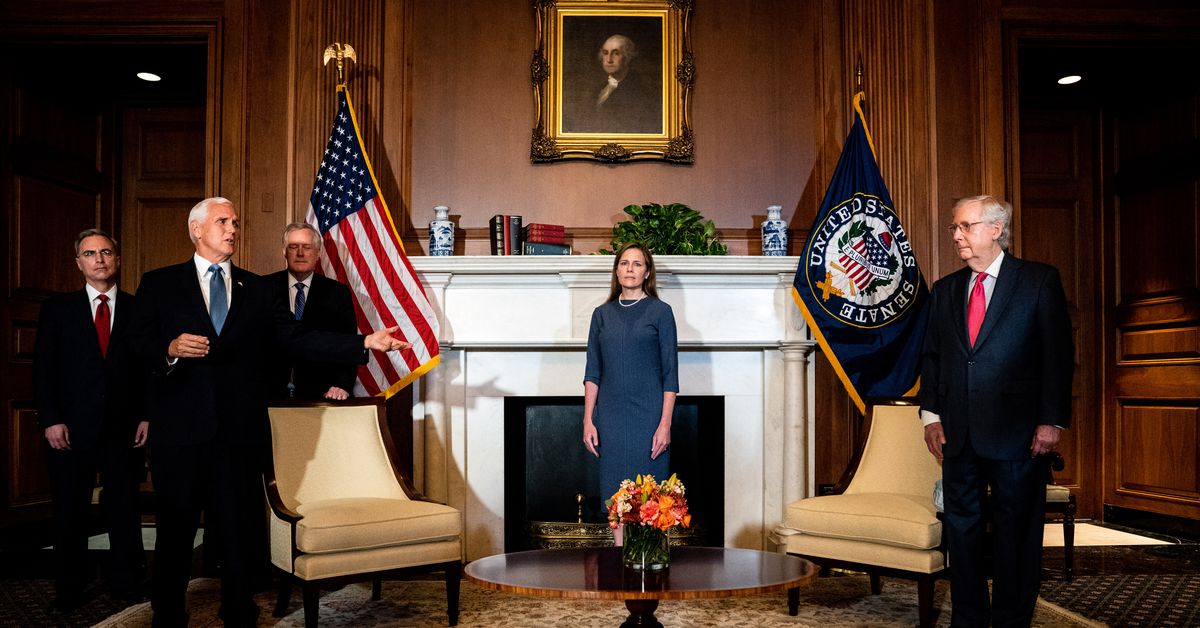 With the number of Republican senators testing positive for Covid-19 growing by the day, the US Senate won’t come back until October 19, Senate Majority Leader Mitch McConnell announced on Saturday.

Even so, Republicans on the Senate Judiciary Committee are still moving forward with their October 12 Supreme Court confirmation hearing for Judge Amy Coney Barrett — even though two Republican members of the committee have tested positive for the novel coronavirus that causes Covid-19.

“According to the standing rules of the U.S. Senate, committees may convene regardless of whether or not the Senate is in session,” a Judiciary Committee spokesperson said in a statement released Saturday. “The Senate Judiciary Committee … will proceed with the consideration of the nomination of Judge Amy Coney Barrett to be an Associate Justice on the Supreme Court of the United States on October 12.”

After attending a White House event honoring the Supreme Court nominee to replace the late Justice Ruth Bader Ginsburg last weekend, Sens. Mike Lee (R-UT) and Thom Tillis (R-NC) both announced Friday that they had tested positive for the coronavirus. They both said they would quarantine at home — but only for 10 days instead of the typical 14, to be able to attend the beginning of Barrett’s hearings.

The growing number of senators who tested positive and thus need to quarantine at home could threaten to derail the prospect of quickly confirming Barrett to the Supreme Court. It also raises questions about how to keep everyone involved in the hearings and votes safe from potential exposure after the White House event.

Still, Graham has vowed to push ahead with the start of the process. Graham announced Friday he had tested negative for the coronavirus and would continue the confirmation hearing as planned.

“I feel fine and look forward to the hearing for Judge Amy Coney Barrett on Oct. 12,” Graham tweeted. “Any Senator who wants to participate virtually will be allowed to do so.”

While Republicans are proceeding with the confirmation hearing, what’s less certain is how this all impacts their timeline for a Judiciary Committee vote on Barrett, planned for October 22. Republicans fear if Democrats boycott the hearing and more of their members are still out sick, they may not have enough votes for a required quorum. Committee rules require a majority of committee members to be present in order to have a quorum. Republicans have 12 of the total 22 seats on the committee, so they can’t afford many GOP members to be absent.

The Senate has not yet changed its rules allowing remote voting, which could make a committee vote in the coming weeks tough. But it’s important to note that Senate rules allow Senate Majority Leader McConnell to bring Barrett’s confirmation to the floor regardless of how the committee vote turns out.

“The decision to recess the Senate for two weeks after at least three Republican Senators have tested positive for COVID-19 makes clear that the Senate cannot proceed with business as usual as the virus continues to run rampant,” Schumer said. “If it’s too dangerous to have the Senate in session it is also too dangerous for committee hearings to continue.”

Senate Republicans seem determined to press ahead with their timeline as the number of people who have tested positive for the virus in President Trump’s circle has expanded. Many of them appear to have attended the reception for Barrett held at the White House recently.

Besides Tillis and Lee, Sen. Ron Johnson (R-WI) also announced he has Covid-19. Johnson isn’t a member of the Judiciary Committee, but Senate Republicans certainly will need his vote for a final floor confirmation vote for Barrett. And with senators attending lunches together this week, there’s a chance more Covid-19 cases could emerge in the coming days.

As Vox’s Li Zhou writes, McConnell hasn’t yet said when a floor vote might happen, only that he expects Judiciary Committee proceedings to wrap up.

Given renewed concerns about coronavirus exposure, the hearings for Barrett could end up being remote, McConnell noted. He added that he expects a [committee] vote on her nomination to be wrapped up by October 22, though he has yet to specify a final day for a floor vote. Thus far, there are no plans to change up timing on the nomination. Schumer and Feinstein have argued, too, that a virtual hearing is not sufficient because of the seriousness of the process.

It’s too early to tell how these early diagnoses could affect the push to confirm Barrett, but things are looking more complicated by the day.

Will you help keep Vox free for all?

The United States is in the middle of one of the most consequential presidential elections of our lifetimes. It’s essential that all Americans are able to access clear, concise information on what the outcome of the election could mean for their lives, and the lives of their families and communities. That is our mission at Vox. But our distinctive brand of explanatory journalism takes resources. Even when the economy and the news advertising market recovers, your support will be a critical part of sustaining our resource-intensive work. If you have already contributed, thank you. If you haven’t, please consider helping everyone understand this presidential election: Contribute today from as little as $3.

Slate writer welcomes 'due process' for Cuomo after warning Americans 'should...