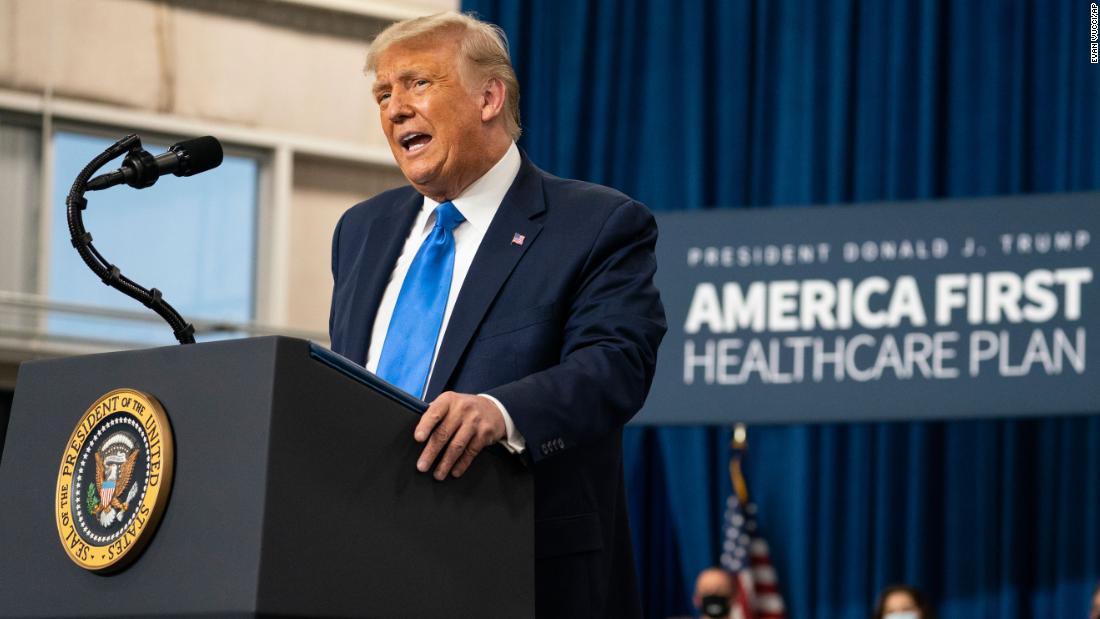 The unprecedented move, however, has raised many questions, including how the roughly $6.6 billion in benefits will be funded. And the timing has fueled accusations that the effort is a late-stage attempt to curry favor with senior citizen voters, who polls show favor Democratic nominee Joe Biden.
The White House says that the cards will be offset by savings from another of Trump’s drug price proposals, which would link the cost of certain Medicare drugs to the price in other countries. But that controversial measure was unveiled in an executive order in mid-September, and it’s unclear when it will actually take effect, if ever.
“It’s illusory savings because they don’t exist,” said Aaron Kesselheim, a professor of medicine at Harvard University. “It’s a program that’s just sketched out in the broadest terms in an executive order just last week. To think this is the balance that they would use is unprecedented.”
Asked about the funding Friday, a senior administration official said the details are still being worked out and the White House will release more information soon. The Wall Street Journal reported that the money will come from a Medicare trust fund.
The White House also pointed to a section of the law that gives the Centers for Medicare and Medicaid Services the authority to waive Medicare payments and benefit statutes to conduct demonstration projects. The agency uses demonstrations to test innovations that have been shown to be successful in improving access and quality and/or lowering health care costs.
Experts, however, question what test the agency is undertaking with the discount cards, which are aimed at helping seniors cover their drug co-pays. The plan may be to see whether the additional financial help prompts beneficiaries to better adhere to their prescribed medicines, the White House told the Wall Street Journal.
But dozens of studies have already found that to be true, plus it would be difficult to make that assessment based on a one-time payment, Kesselheim said.
The cards will be mailed in coming weeks, the White House said. But a senior administration official said not all would be in the hands of Medicare beneficiaries by Election Day.
Trump’s announcement of the cards, which came during a speech listing the health care actions he’s taken during his first term, is the President’s most recent effort aimed at convincing Americans he’s fulfilling his pledge to lower drug prices.
“It’s the first time that money came from Big Pharma back from their pockets in the pockets of American seniors,” White House chief of staff Mark Meadows told CNN’s Wolf Blitzer Thursday. “If they have any question about if he’s for real, wait until that card is received in the mail.”
The move follows a series of executive orders he’s signed in the past two months that largely recycle prior proposals, including allowing the importation of drugs from Canada and effectively banning drug makers from providing billions of dollars in rebates to pharmacy benefit managers and insurers.
However, a single infusion for seniors will not help lower drug prices, said Craig Garthwaite, director of the Program on Healthcare at the Northwestern’s Kellogg School of Management.
“I was just a bit baffled what from a policy standpoint this could be other than currying favor with particular groups,” said Garthwaite, noting that discount cards that drug companies send consumers are viewed as pushing up prices.
During recent negotiations over drug costs, Trump had pushed the pharmaceutical industry to send $100 cash cards to millions of seniors, according to the New York Times. But drug companies balked at sending what some called “Trump Cards,” and the deal collapsed.
The main industry lobbying group said it did not have any additional information about the $200 cards, but voiced its opposition to the idea.
“As we’ve previously said, one-time savings cards will neither provide lasting help, nor advance the fundamental reforms necessary to help seniors better afford their medicines,” according to a statement from PhRMA.
The White House did not answer a question about whether the cards would have Trump’s name on them.