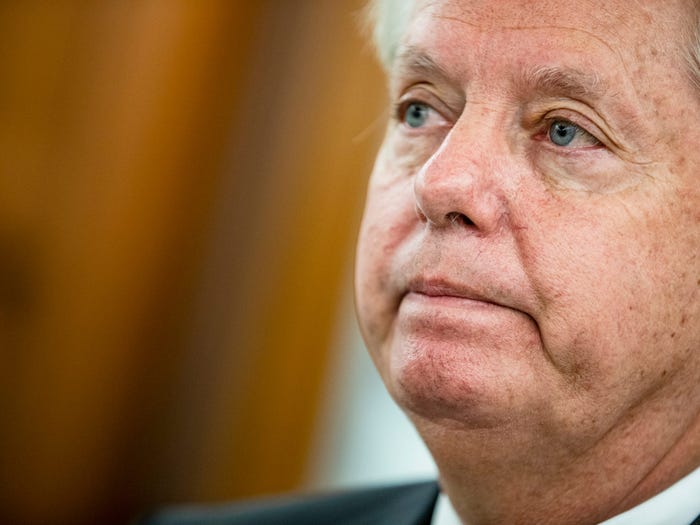 “The president is contesting the election, and I would urge him to give intel briefings to Joe Biden,” he said. “How much further to go? I don’t know. We’re going to be fine at the end of the day. This thing will work itself out.”

Graham, a Republican from South Carolina and the chairman of the Senate Judiciary Committee, is a staunch supporter of Trump and has backed the president’s legal efforts to uncover voting irregularities in the November election, despite there being no evidence of widespread voter fraud.

Graham has come under scrutiny in recent days for inserting himself in the vote-counting and certification process in a number of states, notably Georgia.

On Monday, The Washington Post reported that Georgia Secretary of State Brad Raffensperger had concerns about Graham questioning whether legally cast ballots could be tossed out for signature-verification mismatches.

Raffensperger, a Republican, has received death threats regarding the results of the presidential election in Georgia, which was narrowly won by Biden after nearly three decades of GOP dominance. The secretary of state has even been called on to resign by GOP Sens. David Perdue and Kelly Loeffler, who are heading toward runoff elections in January and alleged that he “failed to deliver honest and transparent elections.”

“The election appears to be very accurate, and as a Republican, I’m disappointed, but as a secretary of state, my job is to report accurate results,” Raffensperger told Insider during a Wednesday interview.

Georgia is undergoing an audit of the presidential election in each of its 159 counties, but it’s not expected to dramatically alter Biden’s lead of about 14,000 votes.

Besides Graham, a few other members of the Senate Republican caucus have called for Biden to receive briefings, including Sens. Susan Collins of Maine, Lisa Murkowski of Alaska, Mitt Romney of Utah, Marco Rubio of Florida, and James Lankford of Oklahoma.

“There’s nothing wrong with Vice President Biden getting the briefings to be able to prepare himself and so that he can be ready,” Lankford said in a November 11 radio interview.

However, most Senate Republicans have remained silent about Biden’s impending transition and declined to refer to him as the president-elect.

Senate Majority Leader Mitch McConnell of Kentucky, who has a decadeslong working relationship with Biden from the president-elect’s days in the Senate, has so far supported Trump’s legal efforts but said on Tuesday that there would be an “orderly transition” between the administrations.

Two crossed lines that form an ‘X’. It indicates a way to close an interaction, or dismiss a notification.

Will AstraZeneca-Oxford's coronavirus vaccine protect you from disease?