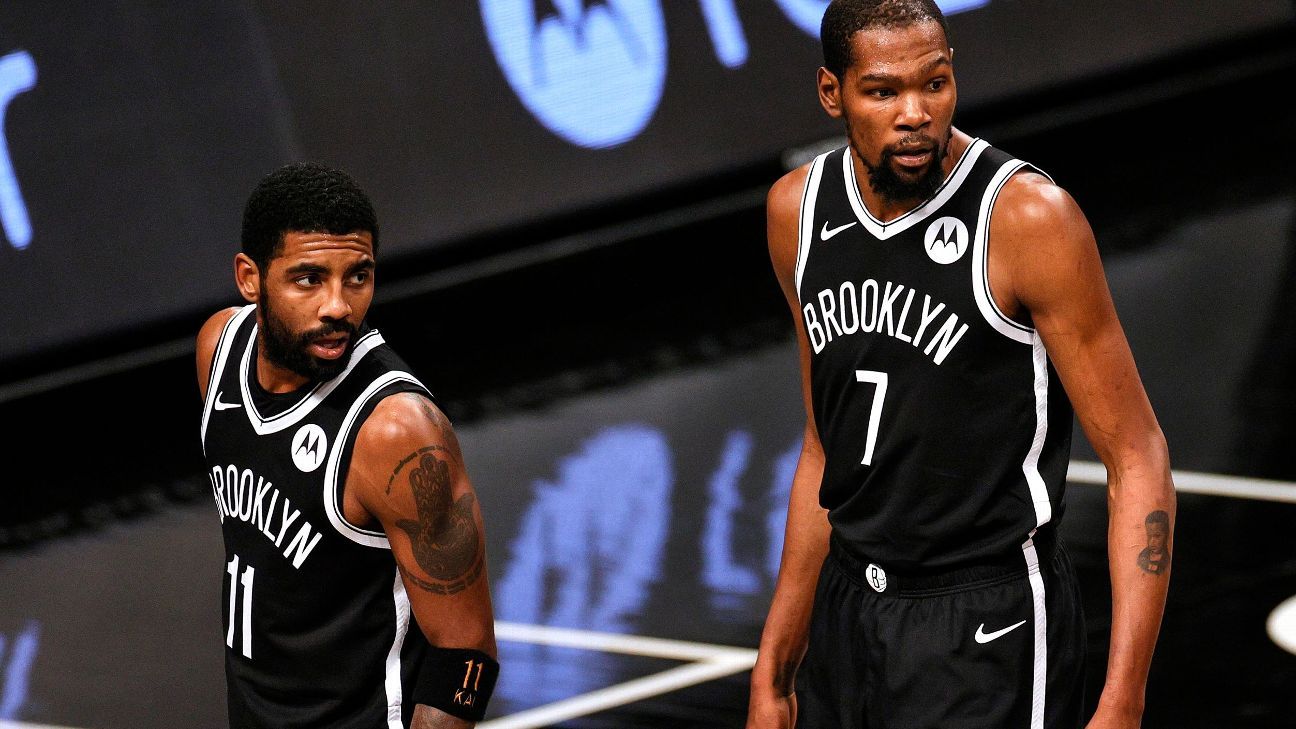 NEW YORK — Brooklyn Nets general manager Sean Marks said Kevin Durant and Kyrie Irving have “conviction” about the direction of the team in the wake of the trade to land James Harden and are prepared to make the necessary on-court sacrifices.

“[I was] getting their thoughts and really wanting to hear what their commitment was going to be, what their conviction was,” Marks said in a news conference Thursday. “I enjoyed hearing that conviction, and we’ve got some time to see how it translates on the court.”

Harden, who is scheduled to arrive in New York on Thursday, will be eligible to play once he and all the other players involved in the multiteam deal have undergone a physical examination. Once Harden is cleared, the focus turns to how the Nets’ new Big Three will jell on the court and how their supersized personalities will mesh off of it. Marks said that he didn’t have to broach the subject of touches and making it work on the floor with Harden, Durant and Irving — instead, they brought it up to him.

“At the end of the day, that’s what we need to hear,” Marks said. “And that’s the level of sacrifice and these guys know it. And each one of these guys is capable of, you know, leading a team, being the star player on a team and so forth. And, you know, there will be nights when each one has that opportunity. Maybe two or three have that opportunity on any night.”

With games being crammed in every other night most weeks — and Brooklyn trying to balance practice, rest and film sessions — Marks said that the actual games, in many ways, will have to serve as their practice. Marks added that he is banking on Harden’s previous connections with his Brooklyn teammates to expedite the process. Durant and Harden played together in Oklahoma City, and Harden played with Jeff Green with the Thunder and with the Rockets.

While Harden’s tenure in Houston came to a bumpy end — with him publicly declaring the Rockets “just aren’t good enough” and “it’s something I don’t think can be fixed” — Marks said that the six-time All-Star reassured him that, “I want to win. I am all about winning.”

Marks said that he feels Durant, Irving and Harden have given him “the right answers” to the locker room and basketball puzzles they could face.

That goal is to win a championship — and soon. As part of the Harden deal, Brooklyn will not control any draft picks for the next seven years. Some compare this to 2013 when the Nets mortgaged their future in draft picks to get Kevin Garnett and Paul Pierce. However, the Nets at the time did not have a Durant-type player on their roster.

“We’re not bankrupt right now,” Marks said. “There’s still multiple ways to build, and we will continue to build with or without the picks we may or may not have now.”

He added: “We also need to capitalize on the window and what’s in front of us right now.”

Mahomes, other QBs in NFL’s final four share an affinity for the deep ball

'Bet a Benjamin on it': LeBron channels his inner Steph Curry

Shorthanded Pacers bounce back with 104-95 win over Warriors

Holiday: 'I was trying to bring energy' off the bench in...