“Because the margin is still less than 0.5%, the President can request a recount after certification of the results. That recount will be conducted by rescanning all paper ballots,” Georgia Secretary of State Brad Raffensperger had previously said in a statement on Friday after a state audit of the presidential results had been completed.
President-elect Joe Biden, who was declared the winner Friday as the state certified the results, has a 12,670 vote or .2% lead over President Donald Trump in Georgia.
Georgia already conducted an audit of the presidential ballots, meaning all ballots in the presidential race were counted a second time — which was a defacto recount. 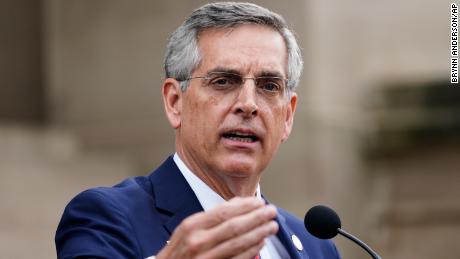 Signature matching for mail-in ballots is not done in recounts, however, according to campaign law expert Jonathan Diaz, a CNN contributor. Comparing of signatures on envelopes of mail-in ballots to those on file is done earlier in the process. The Trump campaign was upset more ballots were not thrown out because of signature issues.
Diaz said “no recount is going to change” the margin of more than 12,000 votes.
“There’s no real point in them doing so, other than to continue to drag out this process and cause further delays,” Diaz said. “It is a time of nonsense,” he said of the recount request. “The war is over.”

CNN’s Noah Broder and Morgan Rimmer contributed to this report.

Trump slams reporter who asks if he would concede election: 'Don't ever talk to the president that way!'