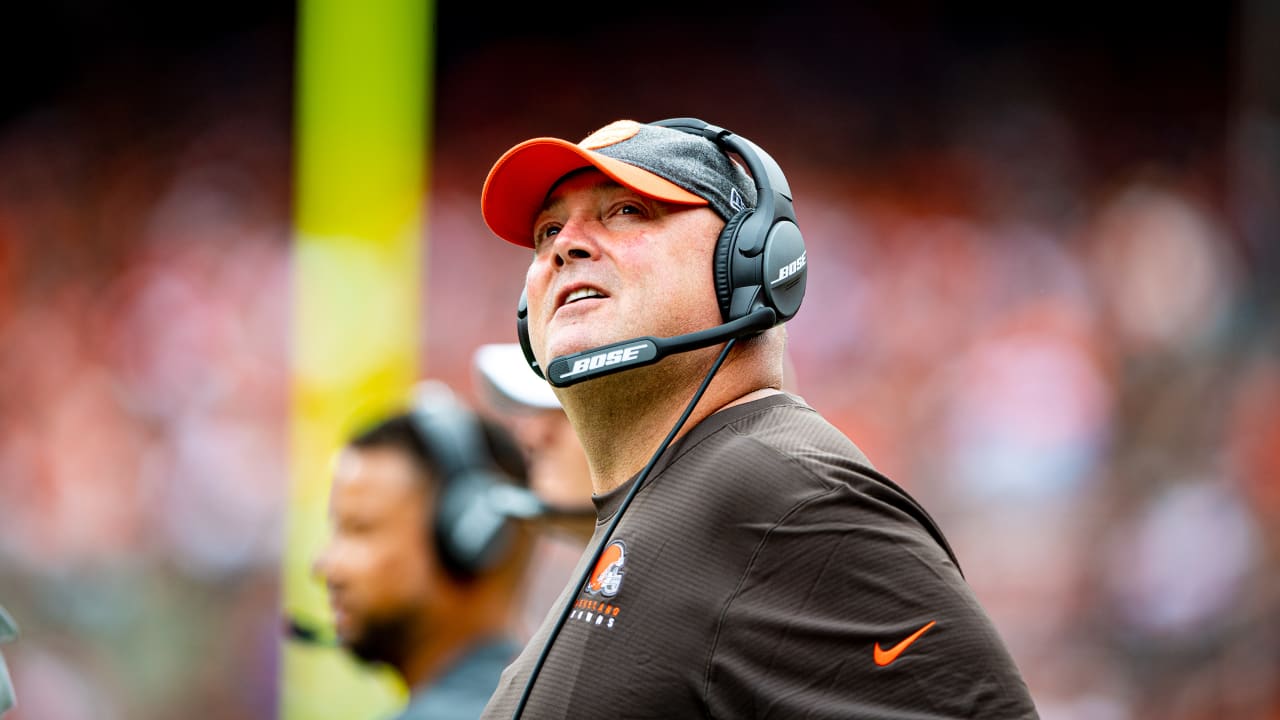 On if the Browns know the severity of T Kendall Lamm’s injury:
“Not totally right now. It is too soon.”

On T Greg Robinson’s ejection:
“We do not tolerate that. That is unacceptable.”

On if the Browns regret not having more active OL today:
“If you would have told me we would lose three in the game, yes, of course. We would do the same thing again.”

On the cause of the penalty and if it was due to the team being too energized for the opener:
“I would not say that. You want them to be excited about the first game. It is just that we have to use our discipline and keep our composure. A lot of the times penalties happen with technique. If it is not a technique penalty, then it is a decision-making penalty, whether it is to stay off the quarterback, stay onside or whatever it is. Penalties are unacceptable. I do not care if it is five penalties or 18. It does not matter. It is all the same. Of course, when you get a bunch of them in the same game, it is going to affect the score. I do not know. I did not see it coming. We will get it rectified, it counts one time and that is the way we will approach it. The world is not falling right now.”

On the Browns defense giving up a few chunk plays:
“They just did not make the tackle. Just did not make the tackle. Out of position. I am not sure if it was eyes or what, but I am sure something happened from a technique standpoint. Nobody was in the position to make the [tackle] on the long run down the sideline so we will see. We will evaluate the tape and see exactly what happened.”

On if overall frustration from the game contributed to QB Baker Mayfield’s mistakes in the fourth quarter:
“I am sure it did. Once they start pinning their ears back, it becomes tough sledding and then the windows get more and more tight and then they make a couple plays. Baker will be fine.”

On if he feels Browns players bought into the hype surrounding the team:
“I would not think. I do not think the penalties have anything to do with believing in hype. It does not really matter to me either way. I just see the penalties, and I see the lack of execution, the lack of discipline. We have to do a better job of preparing them for that.”

On if he was play calling on the fly after Robinson’s ejection and Lamm’s injury:
“No, we were not guessing what was going to work. We still the moved the ball a little. When all that happens and you fall down three scores, it is tough sledding at that point. You are playing with your backup tackle, which they played with and it was no excuse for them. They played with a backup tackle. That was not an excuse for them. I do not see us using that excuse. They are at the game for a reason. They should be able to play.”

On the Titans’ long screen TD and if that was demoralizing after the Browns came back within one score:
“Football is the ultimate team game. It does not matter how they scored or what happened on the play. They scored so the offense has to go out and answer. We have to go out and answer. I have to call better plays to put us in position to answer. We have to execute better to answer. Just because we cut it to two (points) and then they hit a play, hell, they are supposed to hit plays. We are supposed to stop them from getting plays, but we did not. We are supposed to answer that and get it back to two points again. We did not do that, we went to 2nd-and-20. That is not an excuse. Hell, that happens. We just have to keep answering, just keep answering and stay in the game and just keep fighting. I thought we fell victim to being undisciplined and losing out composure. We can’t lose our composure in those situations. We have to just keep going. We have been doing that. We have been just keeping our head down and keep grinding, and that is all you have to do is those situations. Just keep grinding. You are going to catch a break, but if you ever let the score get separated by two and three points, those breaks when you catch them do not mean anything or you are never in position to get those breaks. That is what happens. You just keep grinding. I do not care that they went up and hit a screen. I do not care. Our offense has to answer. Then the defense can give them another chance by stopping them and then those breaks, they help you, but not when you fall down 20 and try to answer.”

On if he views this as a let down will all the excitement that entered the season:
“I hope not. Hopefully, our locker room knows. I know our locker room knows. Hopefully, they know and the fans know the season is not over. We have 15 more games. This is only one. It is very hard to go 16-0. This is one game and if we can learn more from this game early on, then so be it. It is good. Adversity is hitting early, and we are going to find out what kind of team we have now.”

On if one of the hardest things to deal with today was disappointment from Browns fans following the excitement to start the game:
“Not at all. I loved [the atmosphere at the beginning of the game]. I thought the atmosphere was great. We want the atmosphere to be like this every time. We are not going to use the fans as the reason why we had penalties. We had penalties because we were undisciplined. We did not take care of our business as coaches, as players, everybody. The fans had nothing to do with our penalties. The fans got us hyped up so we are going to have penalties? That does not make sense to me so we are going to take care of our business.”

On if it hard for the Browns to see the disappointment of the fans:
“I would assume that they are disappointed in themselves. I am disappointed in myself. We represent the fans in the standpoint of what we want to do well because they demonstrate so much passion toward the game. The disappointment has to come from within individually and collectively that we did not get the job done.”

On how WR Odell Beckham Jr. looked today following the hip injury:
“I think Odell was fine. I think he was good.”

Livability: 12 reasons to move to the Pacific Northwest

NerdWallet: FAFSA and Selective Service: Will applying for financial aid get me drafted?

Nicolas Cage talks melting down in a Volvo, mutual Kesha love and missing his lost meteorite

Livability: 12 reasons to move to the Pacific Northwest

NerdWallet: FAFSA and Selective Service: Will applying for financial aid get...

Commentary: Modernizing Africa’s logistics capacity, one startup at a time