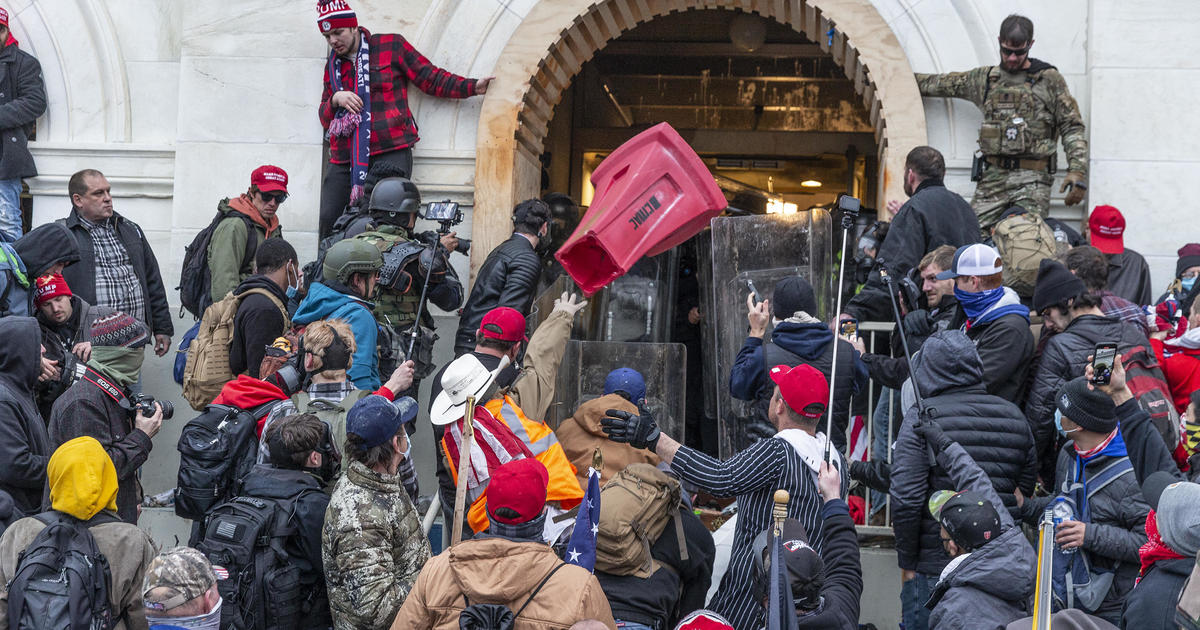 The former Capitol Police chief, Steven Sund, described a “frustrating call” with a U.S. Army official as he tried desperately to get the Pentagon to send help to police outmanned in the Capitol by throngs of Trump supporters last Wednesday.

“I needed boots on the ground, immediate assistance right then and there, helping to form police lines to help secure the foundation of the United States Capitol building,” Sund said in a brief interview outside his home his first on-camera comments. “They were more concerned with the optics.” The Army is charged with approving National Guard deployments in Washington, D.C.

On Wednesday, as rioters pushed past police and smashed windows to force their way into the Capitol, Congress was evacuated in the 1 p.m. hour, as Congress was debating whether to count Arizona’s electoral ballots.

On the call with Sund were D.C. Police Chief Robert J. Contee III and Lt. Gen. Walter Piatt, the Director of the Army Staff, among others. The Army, Sund said, “had a concern with providing National Guardsmen to form a line,” suggesting that it was wary of presenting the appearance of a military response. Sund told the Washington Post, which first reported details of the conversation, that Piatt had said on the call, “I don’t like the visual of the National Guard standing a police line with the Capitol in the background.”

Sund suggested that the Army would have preferred to replace law enforcement officers on “outer traffic posts” with National Guard troops and shuffle the police to the perimeter of the Capitol.

Piatt flatly denied he had made the remarks attributed to him about the appearance of the guardsmen at the Capitol. “I did not make the statement or any comments similar to what was attributed to me by Chief Sund in the Washington Post article,” he told CBS News in a statement.

Piatt also said as soon as Army Secretary Ryan McCarthy received a “specific request for assistance from the Capitol…he ran to the Acting Secretary of Defense’s office to request approval.”

According to a Pentagon timeline, the order to send in the guard was given 40 minutes after the call with Sund began.

Sund told a handful of reporters that all of the available Capitol police officers were on duty last Wednesday — about 1,400 to 1,500 — but said they were quickly overrun by the 8,000 to 12,000 Trump supporters who stormed the Capitol.

“As soon as they hit the west gate, I knew it was like no other mob we’d ever seen. They hit that gate. They immediately tore it apart,” Sund said. “They started fighting with the officers and started hitting them with the fence that we were trying to secure the Capitol with. That’s when I knew things were going bad quick.”

The badly outmatched Capitol forces were battered by rioters.

“These officers were fighting. They were fighting for hours to protect that Capitol,” Sund said. “I saw officers get hit with fire extinguishers,…poles. These people came with baseball bats, metal poles that they were throwing over and over at the officers,” Sund told reporters. He added, “When you think about it, you had 50 to 60 law enforcement that were injured as a result of this. Never seen anything like this.”

Sund, who announced his resignation as chief the day after the assault, said that police had “expected a large event,” and noted that there were events in November and December that had taken place without incident. This was different, though. “We didn’t expect to be in a riotous mob like that.” Acting Capitol Police Chief Yogananda Pittman took over the force on Friday.

Two days before the assault, Sund said he alerted Maj. Gen. William Walker, the head of the DC National Guard, that he might be calling on him for help. Sund also said he had conversations with the House and Senate Sergeants at Arms about putting the National Guard on “emergency standby.”

Though most members of Congress were grateful to the Capitol Police for keeping them from physical harm, some, like House Majority Whip Jim Clyburn, who said his unmarked office was targeted, raised accusations that some inside the Capitol may have been complicit in letting the rioters inside.

“You know I’m sure that will be fully investigated,” Sund said. “But the Capitol Police Department is there to protect the nation’s Capitol, and our legislative body.”

Ryan said the Capitol Police is probing anyone who “could have potentially facilitated at a big level or small level in any way” and is trying to finish the investigations expediently, in order to be prepared for inauguration, just nine days away.

Parler CEO barred from platform backend amid Big Tech crackdown: 'We don't have any more access'

Eliminating Trump from being elected again one motivator in impeachment push,...