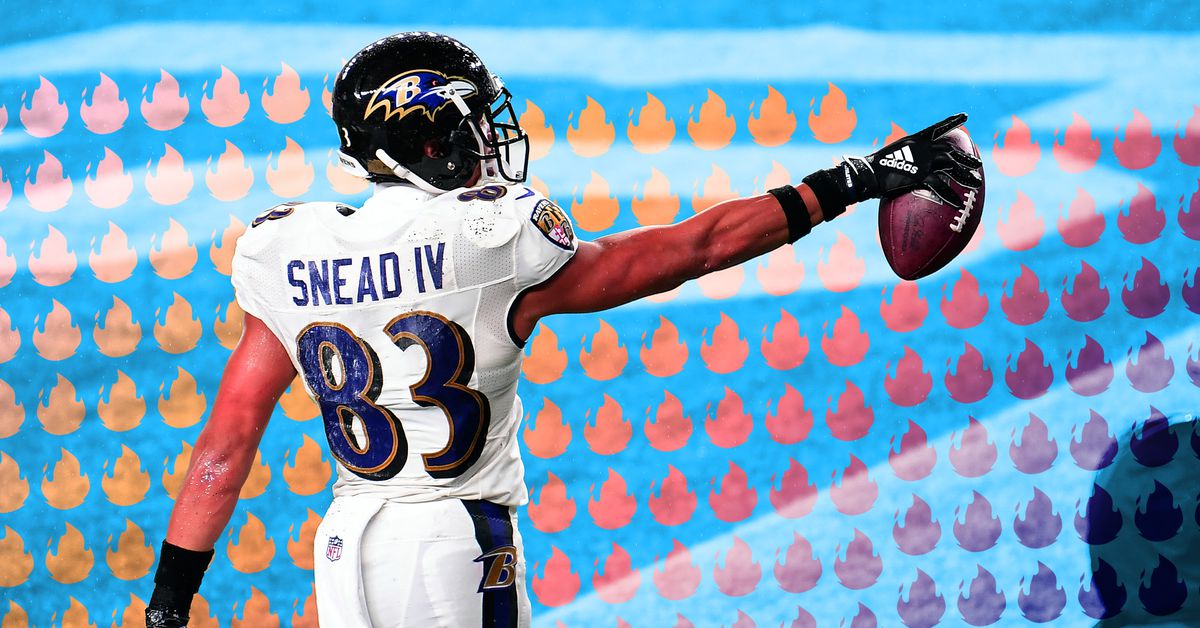 Man, fantasy football can suck sometimes and Week 10 was an almost all-round series of busts from my must starts. The bright spot came in the form of Antonio Gibson, who turned in the RB7 performance with 22.5 points thanks to a pair of short-yardage touchdowns for the Football Team. The rest were the stuff of nightmares, with Jared Goff not throwing a touchdown pass, and the three pass catchers I told you to put in your lineup (Eric Ebron, Travis Fulgham and Curtis Samuel) combining for six catches for 54 yards and just 11.8 fantasy points. Grim.

Onto Week 11 and this week we have another four teams on bye, so you’ll be looking for replacements for the likes of Josh Allen, Stefon Diggs, Allen Robinson and Evan Engram in your teams. Here are the guys I’m slotting into my lineups this week to help me get those all-important wins.

Snead is a sneaky productive player who flies so under the radar as a fantasy asset that he’s only rostered in 4% of Sleeper leagues and started in just 2%. With much bigger fantasy names around him, Snead continues to be a reliable outlet to Jackson and has been a go to guy in the red zone. Averaging six targets per game in the last three weeks and 15.6 points per game, if you’re struggling with byes and injuries to fill your lineup, I’d get Willie on your squad and rest easy.

Lots is up in the air after what seems like the whole Raiders’ defense went onto the COVID list this week, but whatever roster they can get on the field, you have to like the Chiefs coming off a bye and seeking revenge for their Week 5 loss. Available in around half of leagues, Watkins is making his return this week after missing the last five weeks. It’s been a while since we’ve last seen Watkins, but to start the year, he was averaging almost six targets a game and scored twice. With Mecole Hardman still out and the Raiders defense a total mess, Watkins could be in line for a very solid PPR outing in his first game back.

Meyers is turning into a reliable fantasy option n new England and in his last four weeks has averaged over 17 points per game. He’s less available than some of the others on this list at 68% rostered but if you were good enough to snag him a few weeks ago, he’s a WR3/flex starter the rest of the way as the clear number one on the Patriots. The Texans give up the 10th most fantasy points to receivers so Meyers should continue to thrive as the Patriots try to fight their way back to .500 this week.

Who has seen the most targets over the last two weeks in the NFL with 29? That’s right, J.D. McKissic. That’s an insane number and no other player has seen more than 24 (Davante Adams) so its time to unleash McKissic on your rosters. Averaging 13.2 points per game since Week 4, and over 17 points in each of the last two weeks, if you have him, he’s an RB2 option the rest of the way as Alex Smith looks to check down as he gets more comfortable as the starter again. Insane opportunity on a bad team and that leads to fantasy championships.

After a real slow start to the season, Jones is right in the mix now with Kenny Golladay continuing to struggle to stay on the field. Since Week 7, Jones has averaged 17.2 points per game and has a touchdown in each of the last three weeks. The Panthers got blown away by the Buccaneers last time out and even with a banged up Matthew Stafford, the Lions will go after this young defense and Jones has a WR2 floor with WR1 upside this week.

Who has the best fantasy performance this week?

Some GOP officials push back against warnings to stay home for Thanksgiving, accusing Dems of hypocrisy

Whitmer: Atlas’ call for Michiganders to ‘rise up’ against Covid restrictions...