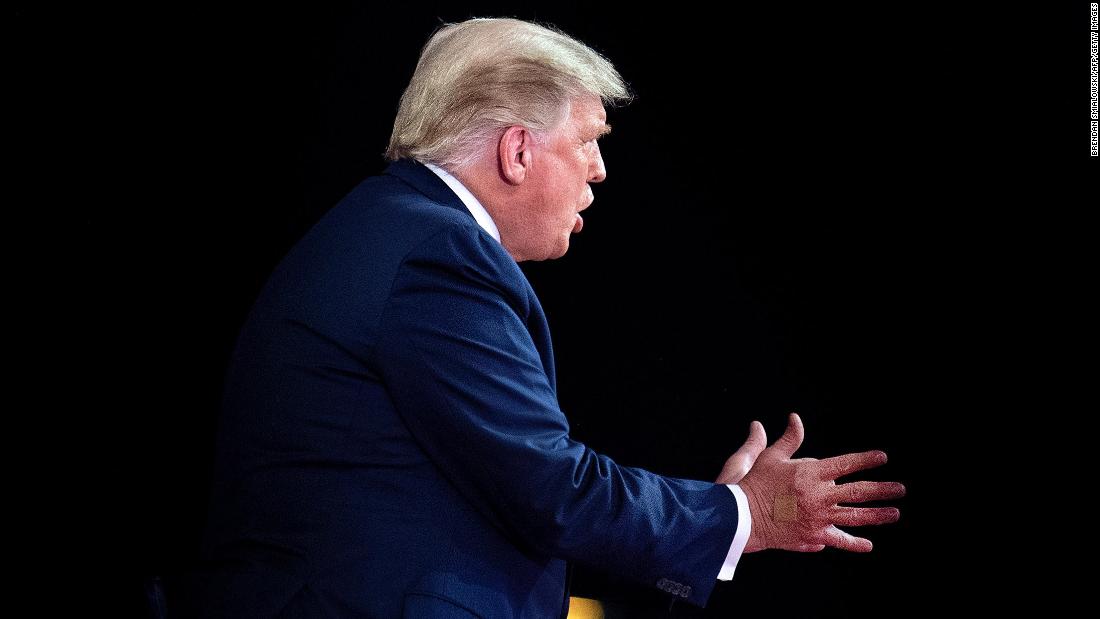 All three times, Trump suggested that the Centers for Disease Control and Prevention had found that 85% of people who wear masks catch the virus.
“CDC comes out with a statement that 85% of the people wearing masks catch it,” Trump said on Fox Business in the morning.
“Then they come out with things today, did you see CDC — that 85% of the people wearing the mask catch it?” he said at a rally in North Carolina in the afternoon.
Trump did not name the CDC as the source of the statistic at the town hall — he attributed the claim to an unnamed “they” — but the substance of his assertion was the same.
Facts First: Trump’s claim is false. The CDC study, which was released in September, did not say that 85% of all people who wear masks get infected with the coronavirus. In fact, it did not even attempt to figure out what percentage of people who wear a mask get infected with the coronavirus.
Let’s walk through the problems with Trump’s claim.
Problem 1: The study was not even about what percentage of mask-wearers get the coronavirus.
Polls suggest tens of millions of Americans wear masks at least some of the time. The CDC study did not examine what percentage of these tens of millions of mask-wearers have been infected with the virus.
Rather, the study looked at the behavior of 154 symptomatic people who had tested positive for the coronavirus in July, at 11 sites around the country, and 160 people who reported symptoms but tested negative in July at those sites.
The study attempted to assess how the spread of the virus was affected by “community exposure,” such as people going to a restaurant, office, salon or gym, and by “close contact exposure” to infected people.
The study’s headline finding was that the 154 study participants who had tested positive were much more likely to have reported dining at a restaurant in the two weeks before the onset of their illness than were the 160 people who had tested negative.
The study also found that, of the 154 participants who tested positive, a total of 85% said they had worn a mask either “always” (70.6%) or “often” (14.4%) over the 14 days prior to the onset of their illness. Of the 160 people who had tested negative, conversely, a total of 88.7% said they had worn a mask either “always” (74.2%) or “often” (14.5%).
So reported mask-wearing was not statistically different among people who tested negative than among people who tested positive.
But that’s not even the point.
Trump was suggesting that the CDC found that 85% of all people who wear masks get the coronavirus. But the CDC was just looking at the behavior of these 314 symptomatic people who sought out testing at 11 particular sites in July.
Here’s how one of the co-authors, Christopher Lindsell, co-director of the Center for Health Data Science at Vanderbilt University Medical Center, described the study’s data on masks.
“The data suggest that among a group of patients who are already showing symptoms that prompted them to get testing for the virus, there was no statistical evidence of a difference in mask wearing behavior between those who tested positive and those who tested negative,” Lindsell said in an email. “This is very different from the question of whether wearing masks prevents you becoming infected with the virus, and it is also different to the question of how many or what percentage of people who wear masks contract the virus. The study was not designed to answer these questions.”
Problem 2: We don’t know how frequently the infected people actually wore the mask — and where they took it off.
The study participants self-reported their behavior. The authors noted in the study that participants’ answers might have been affected by the fact that they knew whether they had tested positive or negative before they responded.
And while, again, 70.6% of the infected people said they had “always” worn a mask over the previous 14 days, 40.9% also said they had gone to a restaurant — where, obviously, people take off their masks.
“Masks cannot be effectively worn while eating and drinking, whereas shopping and numerous other indoor activities do not preclude mask use,” the study said.
The CDC would not directly address Trump’s claim. But when CNN asked for comment, the CDC emphasized that even people who reported “always” having worn a mask may not have actually done so all of the time. Spokesman Benjamin Haynes noted that “people who attend restaurants cannot wear masks effectively while eating and drinking.”
Problem 3: Masks are primarily intended to protect other people, not the person wearing the mask.
There is scientific evidence that masks provide protection to the people who wear them. But even if mask-wearers do end up getting infected, that does not mean masks aren’t working at all — because masks can still help others from getting infected. Haynes said, “CDC guidance on masks has clearly stated that wearing a mask is intended to protect other people in case the mask wearer is infected.”
The CDC continues to be a vocal advocate of mask use. In September, after this study was published, CDC director Dr. Robert Redfield pleaded in congressional testimony for “all Americans” to wear a mask, saying: “We have clear scientific evidence they work, and they are our best defense.”