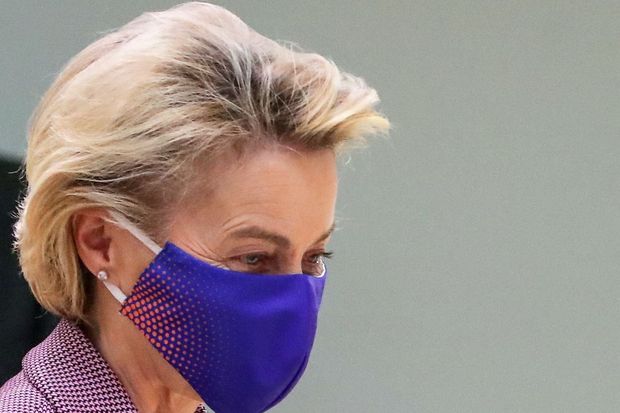 European Commission President Ursula von der Leyen looks on at the start of an European Union summit at the European Council Building in Brussels, on October 15, 2020.

The president of the European Commission has left a key EU summit attended by all 27 presidents and prime ministers of the bloc, after a member of her team tested positive for COVID-19.

The politician wrote in a tweet on Thursday: “I have just been informed that a member of my front office has tested positive to COVID-19 this morning. I myself have tested negative.

“However as a precaution I am immediately leaving the European Council to go into self-isolation.”

Von der Leyen left the two-day European Council summit, which began in Brussels on Thursday, after 30 minutes, but this wasn’t before greeting all 27 leaders and holding bilateral talks with the Czech and Portuguese prime ministers.

She was due to give an update later in the day on the progress made in trade talks between the EU and U.K. Von der Leyen had met with U.K. Prime Minister Boris Johnson on Wednesday evening but the get-together was remote.

Belgium’s capital Brussels is a COVID-19 hot spot and von der Leyen has been forced to isolate previously. In March, Michel Barnier, the EU’s chief Brexit negotiator, tested positive, as did Johnson. Both have since recovered.

Opinion: Trade-deal compromise is possible, Boris Johnson hints — we’ve heard that before, but here’s why it matters this time

—Queen Elizabeth made her first public engagement in seven months but didn’t wear a mask. The U.K. monarch, 94, visited Porton Down, the Defense Science and Technology Laboratory in Salisbury, west of London, on Thursday, and was joined by Prince William, the Duke of Cambridge, who also didn’t wear a mask.

Porton Down is the government laboratory that helped identify the nerve agent novichok thought to have been used in the poisoning of former Russian military intelligence officer Sergei Skripal and his daughter Yulia in 2018.

Read: Netflix is pushing for huge international expansion after successes with ‘Sex Education’ and ‘The Crown’

It was reported that all 48 staff members who came into contact with the queen were tested for COVID-19 and were negative. She did, however, wear a pink coat, hat and gloves, and was socially distanced.

Since March, the queen has been isolating with a small group of courtiers dubbed HMS Bubble.

: Invisalign maker Align is all smiles as stock jumps 25% with help from TikTok star

: Venmo’s new credit card has personalized rewards — it could...