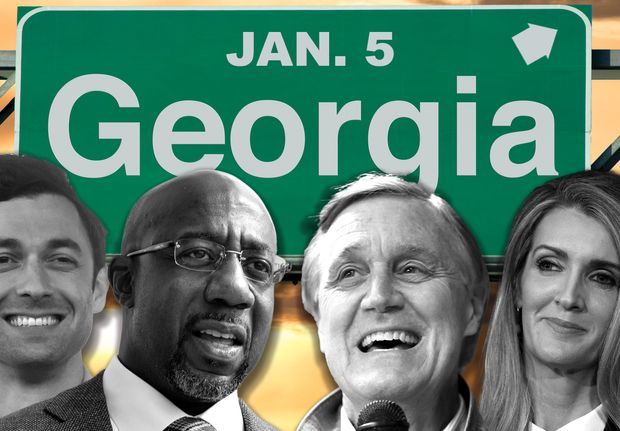 The battle for control of the U.S. Senate will be waged 600 miles to the south in an extraordinary pair of runoff elections for both of Georgia’s seats in the chamber.

Republicans control 50 seats in the next Congress and need only one of their incumbents to win re-election in Georgia to maintain control of the upper chamber.

If Democrats win both, they can control the Senate with the narrowest margin, reliant upon a tie-breaking vote by Vice President–elect Kamala Harris.

Once reliably in the Republican camp, Georgia has become a swing state as the Atlanta region has become a magnet for highly educated workers.

The district in the Atlanta suburbs once held by Republican firebrand Newt Gingrich is now held by Lucy McBath, an African-American woman who lost her son to gun violence.

Democrats have not fared well in the state’s Senate runoffs, which were set up to dilute the power of Black voters.

Sen. Wyche Fowler, a rising Democrat, was tripped up by the runoff election in 1992, when Bill Clinton became president. And Republican Sen. Saxby Chambliss won a second term in a 2008 runoff.

Money is pouring into the state, and could spark $1 billion in spending on the four campaigns.

The conventional wisdom is that Republicans will win one of the two seats — and thereby keep control of the Senate, said Lara Brown, the director of the Graduate School of Political Management at George Washington University, in an interview.

But Brown said she doesn’t agree. She thinks either the two Democrats or the two Republicans will win. “They will rise and fall together,” she said.

“If there were one race, I would say that the Republicans were favored,” she said. “With two, it’s a different story.”

The races are going to be “so close,” she said.

Higher turnout doesn’t necessarily mean the Democrats are favored. What increases is uncertainty about the outcome, she said.

“High-turnout special elections are not something that happens — they just don’t. So how that goes is kind of anyone’s guess.”

Robert Howard, a political-science professor at Georgia State University, agreed. “If anybody says they know what is going to happen in this election, I think they’re wrong,” he said.

The candidates from each party have been appearing together and are effectively running as tickets — focused on trying to bring out their respective bases.

The two Democratic challengers: The Rev. Raphael Warnock is the senior pastor of the famed Ebenezer Baptist Church in Atlanta, where the Rev. Martin Luther King Jr. was a co-pastor. He is a political newcomer. Jon Ossoff is a journalist and the son of an affluent Atlanta family. He came into the public eye nationally when he narrowly lost a runoff for a seat in the House of Representatives in 2017.

The two Republican incumbents: Sen. David Perdue is a wealthy businessman with good name recognition in the state, given that his cousin, Sonny Perdue, was a former governor of the state. Sen. Kelly Loeffler, the political newcomer who is a co-owner of WNBA Atlanta Dream and married to Jeffrey Sprecher, who heads the Atlanta-based International Exchange ICE, +0.15%, owner of the New York Stock Exchange and other financial exchanges. She was appointed, against the wishes of President Donald Trump and allies, by Georgia’s Republican governor, Brian Kemp, to fill a vacancy that will be up for grabs yet again in 2022.

Perdue may be able to reach the rural Republican base because he is more well known, while Loeffler, frequently labeled the richest member of Congress, may attract support in the suburbs.

From the archives (March 2020): GOP senators Burr and Loeffler under scrutiny over selling stock before the coronavirus market crash — do insider-trading laws apply?

State of play: Pundits give Warnock a better chance of beating Loeffler, while Ossoff is seen as facing longer odds in unseating Perdue.

President-elect Joe Biden is the first Democrat to win Georgia in 28 years. The result was confirmed by a hand recount of votes, state election officials announced Friday morning.

In the election, Republicans did better with working-class voters than ever before. Conversely, Democrats did better than they had since the 1960s with upper-income suburban women, said Republican pollster Frank Luntz in an interview with Bloomberg TV.

Biden is expected to visit the state over the next month. Trump’s plans remain uncertain.

Loeffler and Perdue are hewing close to Trump, questioning the results of Georgia’s election. “It will energize the rural base but keeping Trump a major factor might galvanize a lot of people to vote against him,” Howard said.

Warnock and Ossoff are trying to run a bit of a broader campaign, Howard said, seeking to make health-care concerns a top issue.

Keys to victory: “It’s coming down to the suburbs,” Howard said. Democrats want to make sure the suburban votes turn out, while Republicans want to hold down the margins of their defeat there.

Brown said the progression of the pandemic, the response from Congress and Trump’s concession, should one come, and the transition are factors that may swing the race.

Trump’s unwillingness to concede is a two-sided coin. His insistence that election rigging occurred could infuriate Democrats but could also maintain the political engagement of Republicans who believe him.

Some Republican operatives are worried Trump’s challenging the voting results could hurt turnout. If Trump campaigns in person in Georgia and says the vote was rigged, he will be attacking a Republican secretary of state and a Republican governor, the latter of whom put Loeffler in the Senate.

While Georgia has not been significantly impacted by the explosion of new coronavirus cases across the country, that might change before the Jan. 5 runoff.

Democrats nationwide didn’t do as well in House and Senate races because “they didn’t have an economic message,” Brown said.