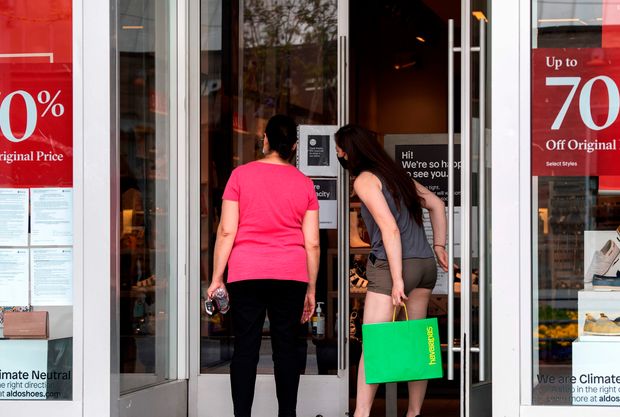 Consumers are worried about a fresh coronavirus outbreak, but they still think the economy will be better next year.

The numbers: Americans grew more worried in early October about a resurgence in the coronavirus and slower hiring, but optimism that the economy will get better next year pushed consumer sentiment to a pandemic high.

The preliminary reading of consumer sentiment index edged up to 81.2 this month from 80.4 in September, the University of Michigan said Friday. That’s the highest level since March, just when the pandemic slammed the U.S.

What happened: An index that measures current conditions slipped to 84.9 from 87.8, indicating Americans are paying close attention to the increase in COVID-19 infections. The outbreaks appear worst in the Midwest, and if cases keep rising, it could lead to more government restrictions.

Yet consumers still think the situation will improve by early next year. An index that measures expectations for the next six months rose to 78.5 from 75.6.

A separate question about who would win the presidential election showed that Democratic challenger Joe Biden expanded his advantage to 7 points in October from just 1 point in July and September. The gap expanded owing to more enthusiasm among Democrats and less among Republicans.

Independent voters, however, favored President Trump by 2 or 3 points, the survey showed.

“Most elections are decided by those who are non-aligned with either party,” noted Richard Curtin, the chief economist at the group that produces the sentiment survey.

Read: U.S. retail sales surge 1.9% in September in show of strength for the economy

The big picture: Higher confidence has long been associated with stronger economic growth and faster hiring. The slight increase in early October is a good sign, but it also includes several warning flags.

What will determine if the U.S. maintains its momentum will depend on whether the spread of the virus is kept under control and whether Congress passes another major stimulus package.

What they are saying? “Overall, sentiment continues to improve slowly as consumers look past the election and are hopeful about prospects for a COVID vaccine and a broader reopening of the economy,” said Thomas Simons, money market economist at Jefferies LLC.

The Tell: These are the stocks to short when a vaccine is ready, says JPMorgan

Outside the Box: S&P 500 corporate boards lack diversity, but these top companies are leading change — and the stock market rewards them

NewsWatch: Stocks have 5% more upside this year, according to this...

: Who’s who in Biden’s economic world

Where Should I Retire?: We want to retire to somewhere our...