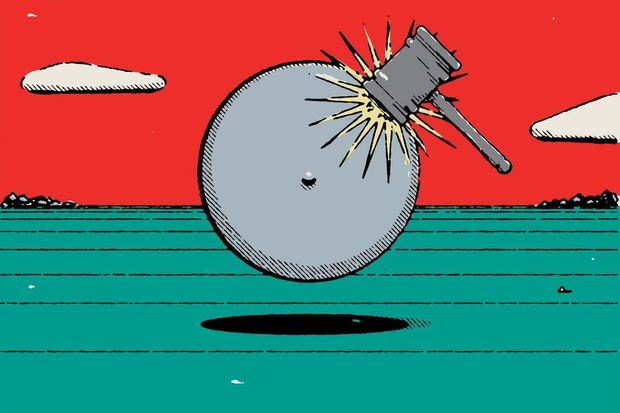 And so it begins. The Nasdaq Composite has been going up for so long now, it’s hard to remember was it feels like for it to go down. Now we know.

Yes, that’s an exaggeration—but not much of one. It had been up for seven of the past nine trading days, and six of the last eight weeks. Today looked like it would be more of the same—the Nasdaq was up 2% at its high of the day—before the selling started.

It would be easy to point at, say, California’s decision to shut down museums, movie theaters, restaurants and bars—at least the indoor parts of those businesses—while Los Angeles and San Diego said school would be online only when the fall school year begins.

There’s only one problem: The Nasdaq and high-flying tech stocks have offered safety from the Covid storm for the last month, while cyclical stocks have taken it on the chin. But the Dow Jones Industrial Average managed to squeak out a gain M onday—it finished up 10.50 points—and it was helped not only by pharmaceutical giant Pfizer (PFE) and health-care titan United Health (UNH), but by industrials Caterpillar (CAT) and 3M (MMM), financial JPMorgan Chase (JPM) and Goldman Sachs (GS), and Dow Inc. (DOW). Each finished up more than 1%.

So what’s going on? NatAlliance Securities’ Andrew Brenner posited that California’s announcement was in fact the reason for the drop—that is after all around the time the market reversed. His explanation for why it was the Nasdaq that got hit: “It led to profit taking in some of the highfliers,” he writes. “We could see the same scenario tomorrow.”

But it could also be the beginning of earnings season that is causing the shift. Banks earnings are coming tomorrow, with JPMorgan, Wells Fargo (WFC) and Citigroup (C) reporting Tuesday morning, and they haven’t rallied much at all since the March lows, a sign of very low expectations. Tech earnings, however, have to be good enough to justify 30% to 40% gains during the past three months, something that could be hard to do.”[We would] assume that the reversal out of momentum / growth continues if Bank earnings are ok tomorrow,” writes Evercore ISI’s Dennis DeBusschere.

And if they’re not? We could end up with the worst of both worlds—falling tech and falling cyclicals…and a full-blown correction.

Stay turned for bank earnings tomorrow to find out.

Write to Ben Levisohn at Ben.Levisohn@barrons.com