Democrats are being touted for a clean sweep of the House, Senate and the White House in a series of election forecasts.

According to those predictions, the party could be in command of all three of these cornerstones of power in the United States following the upcoming elections.

Last month, eight Senators were named as being in danger of losing their seats, according to ratings from the Cook Political Report. At time of writing, the website suggests two Republican seats are now “lean” (competitive races in which one party has an advantage) Democrat, six seats are “toss-ups” and two are lean Republican. Three further are rated “likely” Republican and 10 “solid” Republican.

In comparison, only one Democrat-held seat up for election is considered to be lean Republican, by the website. There are none rated as toss-ups, one rated as leaning Democrat and the other 10 are rated as “solid” Democrat.

The Democrats need to win a net four seats if Biden does not win the presidency to have a majority in the Senate, or three if he does because vice presidential nominee Kamala Harris would then cast tie-breaking votes as vice president.

This comes while national polling has Biden in the lead in the race for the White House—and he is also leading in several swing state races which could prove crucial to an Electoral College victory.

Other forecasts have also predicted a triumph for the Democrat over Trump. The Republican incumbent however has pushed back against such polling, branding it fake and suggesting he could win counter to these surveys, as he did in 2016—when he lost in the popular vote but secured his spot in the White House with victory in the Electoral College. 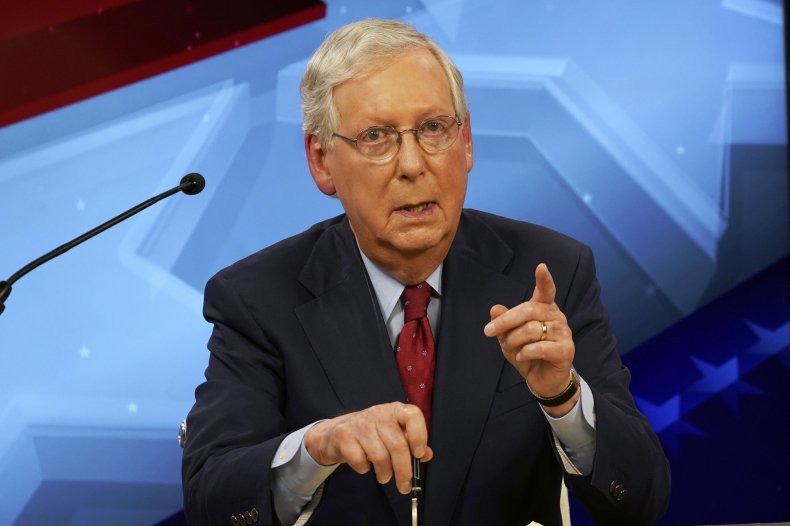 Senate Majority Leader Mitch McConnell (R-KY) speaks during a debate with Democratic challenger Amy McGrath in Lexington, Kentucky, on October 12, 2020. Forecasts suggest the Republicans are at risk of losing their majority in the Senate. Michael Clubb/Pool/Getty Images

Kelly Clarkson reveals her kids are receiving therapy amid divorce from...