Investors have been enthusiastic about large U.S. banks — the stocks have been soaring. And according to industry analysts, a steepening interest-rate curve, the resilience of consumers and a strong post-crisis economy are set to burnish earnings.

For the fourth quarter of 2020, seven of the 15 largest U.S. banks are expected to report higher earnings per share than a year earlier, which was the last full quarter before the coronavirus caused a lockdown-induced economic recession.

Moving ahead through the close on Jan. 8, let’s look at two charts comparing the two indexes’ performance. 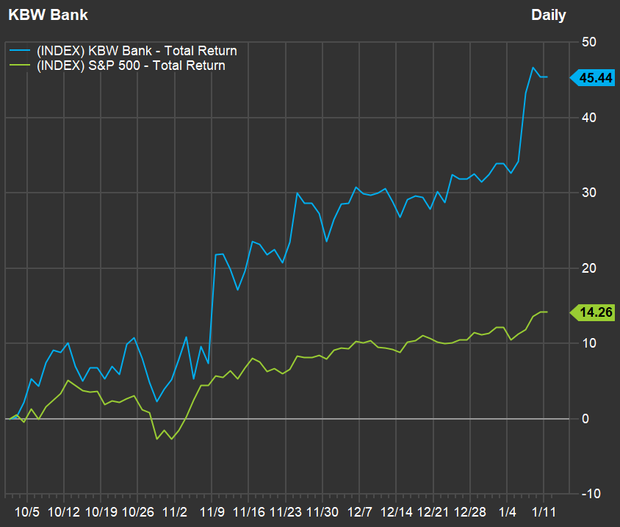 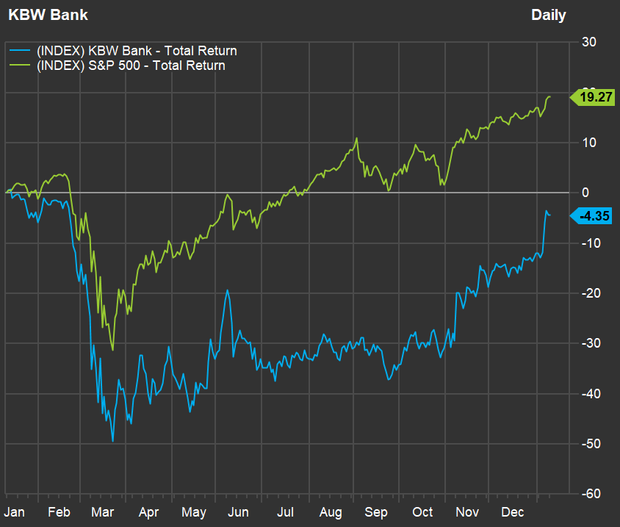 So the banks have been on a tear, as investors have looked ahead to the Biden administration and more government stimulus. But the group still lags behind the broad market by a wide margin — which is understandable, as many investors need to be convinced amid a terrible winter that the pandemic will end in 2021.

“ Wells Fargo and Citigroup are “the stocks to own.” ”

Here are fourth-quarter consensus earnings-per-share (EPS) estimates among Wall Street analysts polled by FactSet for the largest 15 U.S. banks by total assets, along with reported EPS for the previous four quarters:

Scroll the table to see all the data.

It may surprise you to see Charles Schwab Corp. SCHW, +2.15% on the list, but it is indeed a savings and loan holding company that had $321 billion in deposits as of Sept. 30. Gathering deposits from its brokerage clients and making margin loans is an important part of the company’s business. Net interest revenue (interest income minus interest expense) made up 55% of third-quarter net revenue.

Goldman Sachs Group Inc. GS, +1.29% is expected to show the highest year-over-year increase in quarterly earnings per share — 50%. Deutsche Bank analyst Matt O’Connor expects Goldman to report a 26% increase in fourth-quarter investment-banking fees (excluding corporate lending), along with a 20% increase in trading revenue, according to a Jan. 5 note to clients.

Capital One Financial Corp. COF, -1.13% and State Street Corp. STT, +1.31% are both expected to report 16% increases in fourth-quarter EPS from a year earlier.

For many of the listed banks (but not Schwab, Morgan Stanley MS, +1.08%, State Street or Bank of New York Mellon Corp. BK, +1.70%, which have low levels of credit risk), provisions for loan loss reserves were critical items in 2020. The provisions are the amounts added to loan loss reserves in anticipation of credit losses. They directly lower banks’ earnings.

Provisions were extraordinarily high during the first quarter when the pandemic began, and even higher during the second quarter. Provisioning activity subsided in the third quarter, as it became clear that federal stimulus, various moves by the Federal Reserve to shore up the economy and moratoriums on evictions and foreclosures helped consumers, landlords and business owners keep loans current.

Here are estimates of fourth-quarter provisions for loan losses, along with actual numbers for the previous four quarters:

Here are full-year consensus earnings estimates for the 15 largest U.S. banks going out to 2022:

For the full year 2020, all the banks are expected to report lower earnings than in 2019, with the exceptions of Morgan Stanley, PNC Financial Services Group Inc. PNC, +0.75% and State Street. PNC’s 2020 earnings for the year are expected to increase by 43%, mainly because of the profit from the sale of its stake in BlackRock Inc. BLK, +1.35% in May.

Here’s a summary of analysts’ opinions about the 15 banks, along with current price-to-book and forward price-to-earnings ratios:

With such a tremendous recent move for bank stocks, it is no surprise to see that the consensus 12-month price targets are close to the current prices. Maybe that underlines how short a period 12 months can be in such a dynamic economic and market environment.

Analysts have majority “buy” or equivalent ratings on eight of the 15 banks.

David Konrad of D.A. Davidson called Wells Fargo and Citigroup “the stocks to own” among his coverage universe in a note to clients on Jan. 6. The yield on 10-year U.S. Treasury notes TMUBMUSD10Y, 1.168% has been rising, and he expects a steepening yield curve to drive gains for shares of large banks that are trading below tangible book value. Wells Fargo is actually trading slightly above tangible book value now, but you can see on the table (by scrolling to the right) that Wells and Citigroup are by far the cheapest stocks by that measure.

Deutsche Bank analyst Matt O’Connor called Bank of America Corp. BAC, +1.66% and UBS his “top picks” among the 15 banks listed above, in his “2021 Outlook” report for the sector Jan. 6. He sees the stocks as among the “most levered” to an improving economy.

Going back to the earnings estimates, analysts are expecting great things from Goldman Sachs over the next two years. In a client note last month, Odeon Capital analyst Richard Bove called the stock a “solid buy,” while writing that CEO David Solomon had “transformed Goldman Sachs into one of the most exciting companies in the financial industry.”

Bove added that because the company is “just beginning” its technological and operational transformation, it “makes a great deal of sense” to buy the stock. But once again it is important to point out that the brokerage industry’s 12-month price targets may be too short. Even with so much earnings growth expected, the consensus price target for Goldman is only 4% higher than the closing price on Jan. 8.