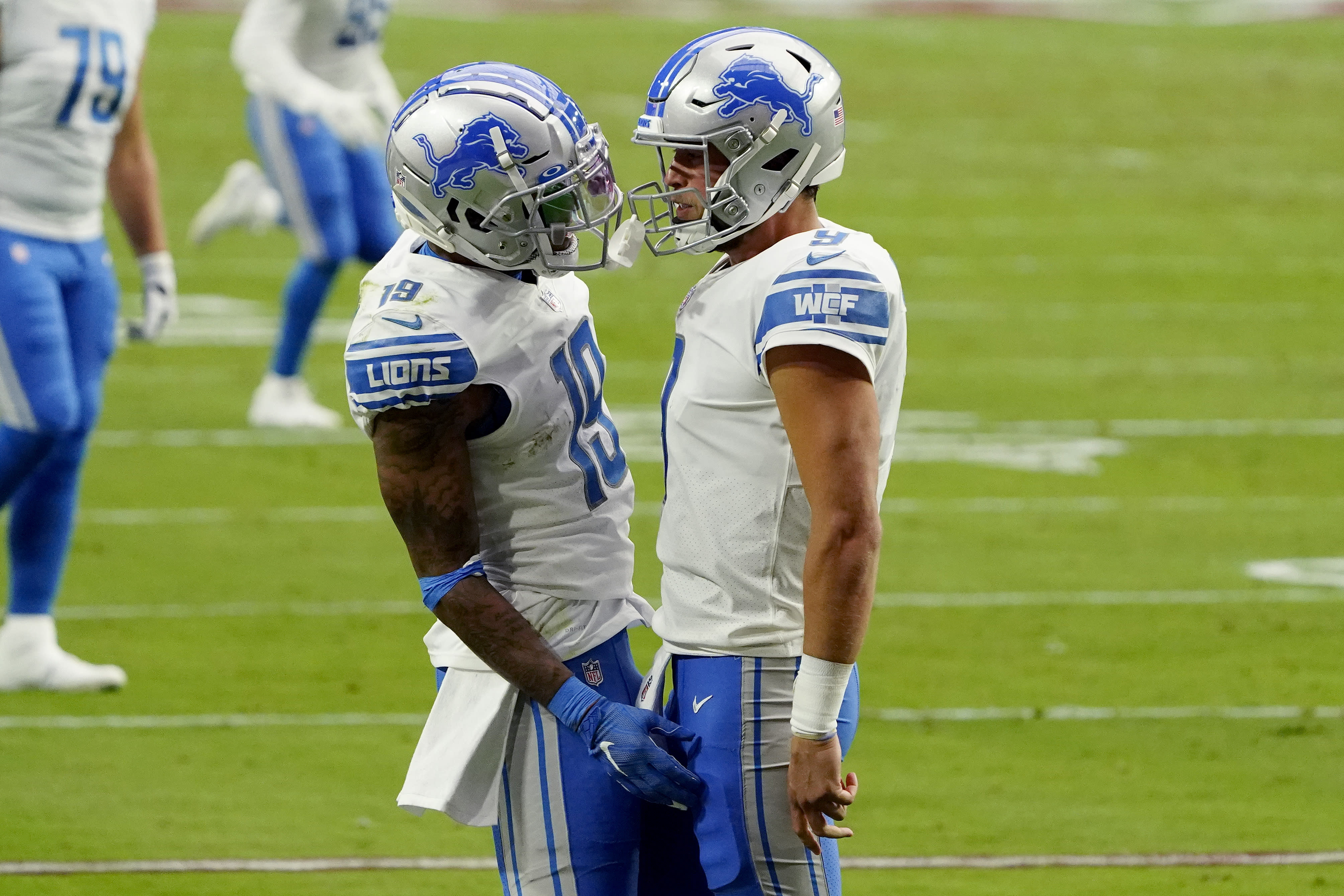 By TJ Hernandez, 4for4

Whether you are playing in the biggest tournament of the week on Yahoo or prefer to play in smaller GPPs, there are some general GPP strategies that you can implement in contests of any size. These concepts include stacking, finding pivots off of popular players, and targeting players that won’t be on many rosters.

[Visit 4for4, where 92% of subscribers made the playoffs, for more]

While it’s important to implement these into your lineup-building approach, the foundation of any tournament lineup is a solid core — usually players that you would use in cash games.

The Lions currently have an implied point total of 28.5, the third-highest on the main slate. There isn’t a wrong way to attack the Jaguars, who are the only defense that 4for4 ranks in the bottom 10 in schedule-adjusted half-PPR points allowed to every skill position. Matthew Stafford posted his highest average target depth of the season (10.6 yards) in his last game, indicating that Detroit may be getting back to the deep-ball attack that led to Stafford’s uber-efficiency in 2019.

Kenny Golladay has accounted for 26.8% of team targets and 30.4% of team air yards in his two games back, with at least 14 Yahoo points in both contests. T.J. Hockenson is the only Lion with at least four targets in each game.

D.J. Chark missed practice Wednesday and Thursday and if he is unable to go in Week 6, Laviska Shenault should see his role continue to expand after seeing eight targets in Week 5. When adjusted for strength of schedule, Detroit ranks in the bottom 10 in schedule-adjusted points allowed to opposing wide receivers.

With the highest over/under of the slate (55.5) and a spread of just 1, this is the most stackable game of the week, especially since both defenses feed into the opposing passing games’ strengths. SportsInfoSolutions highlights Green Bay has the defense playing the second-highest rate of zone coverage in the league while allowing the third-highest quarterback rating against zone. When going up against zone coverage, Mike Evans sees his target rate jump from 16% to 22%.

Aaron Rodgers has averaged a league-leading 10.6 yards per attempt when facing zone coverage, which Tampa plays at a top-10 rate. Teams have run just 30% of the time in neutral game script against the Buccaneers pass funnel defense, so Davante Adams should easily surpass the 10 targets per game that he’s averaged when active this season.

Just a few weeks ago, it would be unfathomable that Dak Prescott, Patrick Mahomes, Kyler Murray, and Josh Allen would all be off the main slate without Lamar Jackson being on an astronomically high number of rosters but that may very well be the case this week, making it the perfect time to roster him. Jackson ran just twice last week, indicating that Baltimore may be trying to protect their quarterback’s knee that caused him to be limited in practice last week. If that’s the case, the Ravens should have an uncharacteristically high passing rate against an Eagles defense ranked in the bottom half of the league in adjusted fantasy points allowed to quarterbacks and a bottom-five rank against wide receivers.

That high passing rate should translate to double-digit targets for Brown for the second time in as many weeks. The receiver known as Hollywood is one of three players with a target share of at least 27% and an air yards share above 40%, indicating tremendous upside.

Running it back with Ertz is a great way to be contrarian when public perception is at an all-time low on the Philadelphia tight end. The leverage of rostering Ertz here can be tremendous when most lineups that stack this game will opt for Mark Andrews as the tight end.

Both running backs in this game offer leverage off of what should be popular passing attacks but with Leonard Fournette returning, Jones should carry a significantly lower rostered percentage than Aaron Jones. Green Bay ranks 27th against running backs when adjusted for strength of schedule.

The Falcons-Vikings game will be one of the most popular games of the week to stack and there could be as many as four players close to or above a 20% rostered rate. One player that won’t show up in many game stacks is Olamide Zaccheaus, after busting as the chalk in Week 5. That makes him a perfect post-hype target against a Vikings defense ranked 29th in schedule-adjust points allowed to wide receivers, assuming Julio Jones is out again. Other than Jones and Calvin Ridley, Zaccheaus is the only Falcon with an average target depth above 10.

Chicago and Carolina are projected to score fewer than 45 combined points but between their running backs and primary wide receivers, could have some of the most popular players on the slate. That makes looking for leverage on either side a potential to strike gold and Jimmy Graham has as much upside as any player on the slate. Graham’s eight red-zone targets are tied for the second-most in football and, more importantly, only one player has seen more targets inside the opponent’s 10-yard line. With the potential to be on fewer than 5% of rosters, Graham is one of the best differentiators of the week on a relatively weak tight end slate.

The backbone of my cash game approach is 4for4’s proprietary value metric, which goes beyond simple point per dollar projections. That value calculation extends to a player’s odds of hitting cash game value based on their implied volatility according to their floor, median, and ceiling projections.

Most of the top-tier quarterbacks are off the main slate, allowing cash game players to roster almost any trio of high-volume running backs without giving up value at other positions. This also happens to be a relatively thin week at tight end, making the decision to pay up at the position largely off the table.

This story was originally published on 4for4.com

More analysis from 4for4: Bankroll Management

Stay ahead with 4for4 Fantasy Football’s accurate rankings, advanced tools and data-driven content.

TJ is a former full-time poker player who has been playing fantasy football for more than a decade. After online poker was outlawed, TJ ended his poker career and dedicated himself to fantasy football. His background in poker statistics and analytics translates to success in both daily and season-long fantasy football.