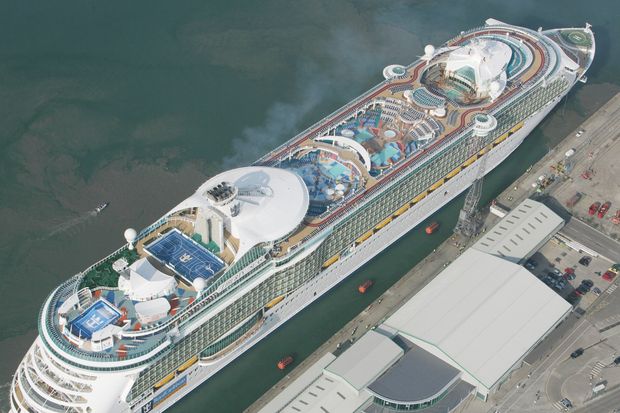 Shares of cruise companies took a beating Tuesday, with Royal Caribbean Group hit the hardest after announcing a total of $1 billion worth of public stock and private convertible debt offerings, and providing a bookings update.

The stock’s selloff also weighed on Royal Caribbean’s peers, as shares of Norwegian Cruise Line Holdings Ltd. NCLH, -6.99% dropped 7.4% to be the second-biggest S&P 500 loser, and Carnival Corp. CCL, -6.72% slid 6.9% to be the third-biggest decliner.

Royal Caribbean said before the open that it had commenced a public offering of $500 million worth of its common stock. Based on Monday’s stock closing price of $69.83, that would represent about 7.16 million shares, or about 3.3% of the shares outstanding . The company plans to use the proceeds for general corporate purposes.

If the underwriters of the offering exercise all of the options granted to buy additional shares to cover overallotments, Royal Caribbean could raise an additional $75 million.

The company said it had also commenced a private offering of $500 million in senior convertible notes, due 2023, and has granted the underwriters options to buy up to an additional $75 million worth of the notes. Royal plans to use the proceeds to pay off its 2.650% senior notes due 2020.

The notes will be convertible at the holder’s option in certain circumstances. The company said it can satisfy its conversion obligation by paying or delivering, “at its election,” either cash, common stock or a combination of both.

Separately, Royal Caribbean said booking for 2021 have continued to improve over the last two months, but remain below pre-COVID-19 levels, while pricing for 2021 bookings is relatively flat.

The company said it is waiting to hear from the Centers for Disease Control and Prevention (CDC) to confirm whether there will be future extensions of the CDC’s previous “no sail” order, which currently extends to Oct. 31.

For now, Royal said it remains “optimistic” that it will be able to resume commercial sailings some time this year.

Where Should I Retire?: This newcomer is the best place to...