VOICE OF THE HWY
Home NEWS SAFETY NEWS Covid-19 neurological symptoms emerge in most hospitalized patients, study says – CNN
Facebook
Twitter
Pinterest
WhatsApp
The study “highlights the high frequency and range of neurologic manifestations, which occurred in more than four fifths of Covid‐19 patients hospitalized in our hospital network system,” the researchers wrote in the study, published in the journal Annals of Clinical and Translational Neurology on Monday. 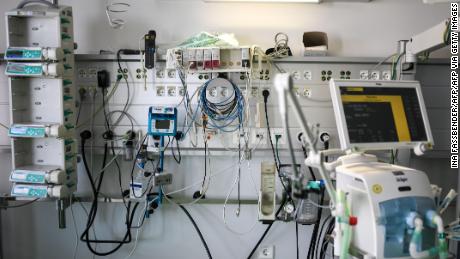 The study included data from medical records on 509 Covid-19 patients who were hospitalized across nine hospitals and an academic medical center within the Northwestern Medicine Healthcare system in the Chicago area between March and April. Among those patients, about a quarter of them — 26.3% — required mechanical ventilation.
The researchers, from Northwestern University Feinberg School of Medicine, found that 42.2% of the patients had neurological manifestations of their Covid-19 illness when they first started experiencing symptoms before going to a hospital.
Then by the time patients were sick enough to be hospitalized, 62.7% of them had neurological symptoms, according to the data.
Overall, the researchers found that at any time during the course of their Covid-19 illness, 82% of patients had neurological symptoms such as headaches or encephalopathy, altered brain function or structure. The most frequent neurologic manifestations were:
The data showed that those with neurologic symptoms also had longer hospital stays — about eight days vs. five days — than those without, and the median amount of time in the hospital for those with encephalopathy in particular was more than threefold longer. 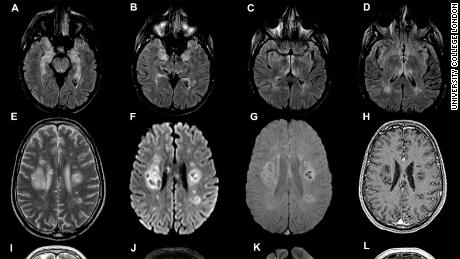 The researchers also found that patients with any neurologic symptoms tended to be younger than those without.
“The fact that any neurologic manifestations as a whole were more likely to occur in younger people is surprising, and could potentially be explained by greater clinical emphasis on the risk of respiratory failure than other symptoms in older patients,” the researchers wrote in their study. “In contrast, encephalopathy was more frequent in older patients.”
Encephalopathy was also associated with an increased risk of severe illness and death, independent of how severe a patient’s Covid-19 was, the researchers found.
Fewer than 6% of patients in the study were evaluated by neurologists or neurosurgeons and more research is needed to determine whether similar findings would emerge within other hospital systems.
This isn’t the first time that neurological symptoms have been studied in Covid-19 patients.
A report in April suggested more than a third of 214 Covid-19 patients studied experienced neurological complications ranging from loss of smell to stroke.
The virus can lead to neurological complications like delirium, brain inflammation, stroke and nerve damage. In a University College London study published in July, 10 out of 43 patients had “temporary brain dysfunction” and delirium, while 12 had brain inflammation, eight had strokes and eight had nerve damage.
Another paper published in June in The Lancet Psychiatry looked at 153 patients in the UK and found even those younger than 60 could have psychosis, depression or strokes.

‘Bachelorette’ star Trista Sutter says her husband has been ‘struggling’ with...

Dispatches from a Pandemic: Italy’s leading epidemiologist on why the virus...