Protesters sit on the roof of a bridge overlooking the blocked Cross Harbour Tunnel. [Thomas Peter/Reuters]

China condemned on Friday an incident involving the city’s justice secretary in London, the first direct altercation between demonstrators and a government minister during more than five months of often violent protests.

Secretary for Justice Teresa Cheng, who was in London to promote Hong Kong as a dispute-resolution and deal-making hub, was rounded on by a group of protesters who shouted “murderer” and “shameful”.

Video footage of the incident showed Cheng falling to the ground.

China’s Embassy in the United Kingdom said Cheng had been “besieged and attacked by anti-China and pro-independence activists” who had organised online and that she had hurt her hand when she fell.

It called on the British police to investigate the incident and to strengthen security for Chinese officials and institutions in the country.

“Ending violence and restoring order is the paramount task in Hong Kong,” the Embassy’s spokesman said in a statement.

The confrontation came amid escalating violence in Chinese-ruled Hong Kong, where a student protester died earlier this month after falling from a car park during demonstrations.

A 70-year-old street cleaner, who videos on social media showed had been hit in the head by a brick, died on Thursday, authorities said.

The Food and Environmental Hygiene Department expressed profound sadness on Friday at the death of the man and said it was providing assistance to his family. 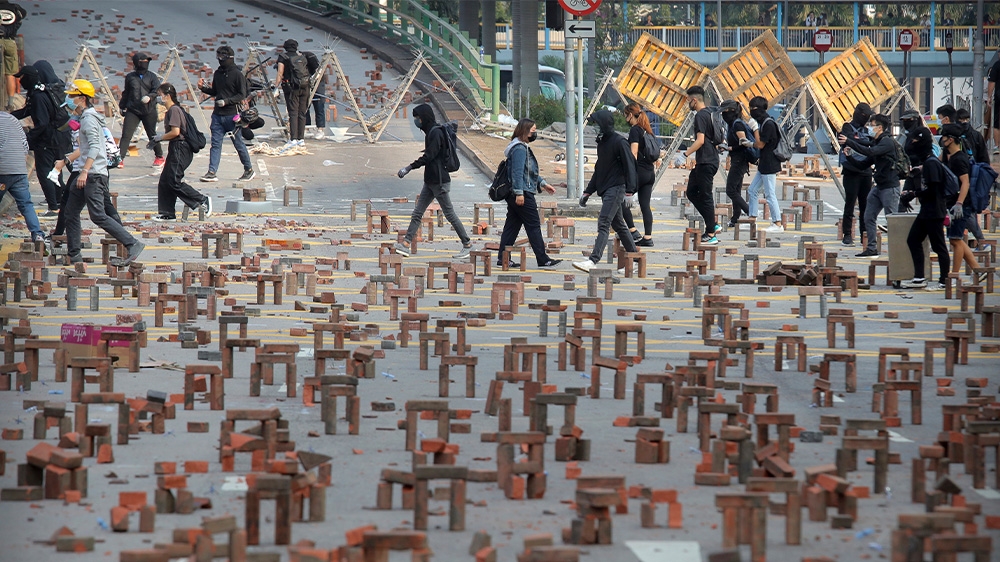 Protesters walk through barricades of bricks on a road near the Hong Kong Polytechnic University in Hong Kong. Protesters have sought to paralyse the city throughout the week. [Kin Cheung/AP Photo]

Anti-government protesters continued their blockade of parts of the city for a fifth day on Friday, forcing schools to close and blocking some highways as students built barricades in university campuses and authorities struggled to end the violence.

The Cross-Harbour Tunnel, a key link between Kowloon and Hong Kong Island, remained closed for a second day after toll booths were set on fire and protesters blockaded the road.

Al Jazeera’s Rob McBride, reporting from the tunnel, said there was a “tense and uneasy calm” in the territory.

“It remains to be seen what the next stage will be as we head into another weekend, which have tended to see the most violent protests,” he said.

The protests escalated in June over a now-scrapped extradition bill that would have allowed people to be sent to mainland China for trial. They have since evolved into calls for greater democracy, among other demands.

The months-long protests have plunged the former British colony into its biggest political crisis in decades and pose the gravest popular challenge to Chinese President Xi Jinping since he came to power in 2012.

Hong Kong is also expected to confirm on Friday that it has fallen into recession for the first time in a decade amid concerns the economy could be in even worse shape than feared as a result of the anti-government protests.