Chicago city officials have released a video showing its former top cop apparently asleep at the wheel in an incident that led to his firing.

The police body camera footage made public Monday depicts former Police Superintendent Eddie Johnson in the driver’s seat of his SUV when an officer arrives and takes his information during an early morning in October last year.

“You just sitting here, or do you want to go home?” an officer is heard telling Johnson after knocking on his vehicle’s window.

“You good? All right sir, have a good night,” the officer responds.

Audio of a 911 call also released Monday reveals a civilian telling a police dispatcher that the SUV’s lights were off but smoke was coming out of the vehicle’s exhaust.

“We are definitely going to get police out there sir, I’m going to see if the ambulance wants to roll because we have to err on the side of caution, OK?” the dispatcher is heard telling the individual. 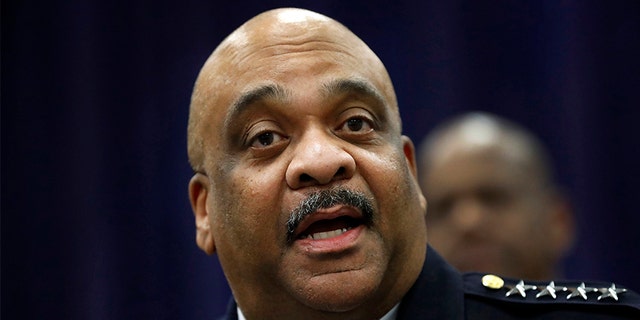 Mayor Lori Lightfoot ended up firing Johnson in December, citing “ethical lapses” that included telling lies surrounding the events leading up to him being found in the idling vehicle. In his initial remarks about the matter, Johnson blamed his failure to take blood pressure medication and feeling ill as he drove home from dinner with friends.

JOHNSON SPEAKS OUT OVER INCIDENT, CLAIMS HE DID NOT MISLEAD THE MAYOR OR PUBLIC

At the time of her firing of Johnson, Lightfoot said he eventually admitted to her that he was out to dinner with friends and had a few drinks before dismissing his driver and taking himself home.

Johnson defended his driving home without being tested for whether he had been drinking, saying, “Someone asleep in a car doesn’t mean they’re impaired.”

After his firing, Johnson said in a statement he did not “intentionally mislead or deceive” anyone about the incident, adding he made a “poor decision” and had a “lapse of judgment.”

Before being dismissed, Johnson, who was appointed by former Mayor Rahm Emanuel, announced his retirement from the Chicago Police Department after three years as superintendent, saying he wanted to spend more time with family. Johnson is collecting a pension of about $16,000 monthly, according to city documents.

Prior to Monday, city officials declined to release the video, pointing to Inspector General Joseph Ferguson’s continuing investigation of the incident. After releasing the information Monday, Chicago’s Law Department spokeswoman Kathleen Fieweger refused to say when the city received the documents from Ferguson.

Global warming over past 150 years has wiped out 6,500 years of cooling, study says

Kobe to be on two covers of NBA 2K21 edition

Can the market sustain hospitals' demand for coronavirus drug, dexamethasone?