Shares of Carnival Corp. dropped Tuesday, helping drag down its peers’ stocks, after the cruise operator disclosed plans for a $1 billion stock offering and for accelerated capacity reductions, as it deals with the negative effects of the COVID-19 pandemic on its operations.

The company also said it swung to a net loss of nearly $3 billion in the third quarter, including more than $900 million in losses on ship sales and impairments.

The stock CCL, -8.85%  tumbled as much as 10.0% early in the session, before paring some losses to be down 8.9% in active afternoon trading. Volume was 57.4 million shares, enough to make the stock the third-most actively traded on the New York Stock Exchange, and already above the full-day average of about 36.9 million shares.

Carnival earlier filed a prospectus with the Securities and Exchange Commission under which it could sell up to $1 billion worth of its common stock. Based on current prices, that could represent about 60.4 million shares, or about 10.1% of the shares outstanding.

The company plans to use the proceeds from a potential share sale for general corporate purposes.

Carnival also said it now expects to dispose of 18 cruise ships in fiscal 2020, representing 12% of the company’s capacity, up from previous expectations that it would dispose of 13 ships. The new disposal plan includes the eight ships that have already exited the fleet, and is part of its plan to become a “leaner, more efficient” company.

The company also disclosed Tuesday that it recorded a net loss of $2.9 billion during the fiscal third quarter, which runs through August, after net income of $1.8 billion in the same period a year ago. Excluding non-recurring items, such as losses on ship sales and impairments and restructuring expenses, the adjusted loss would be $1.70 billion.

The FactSet consensus for net losses was for $1.66 billion.

Stocks of other cruise ship operators fell in sympathy with Carnival, despite a rally in the broader stock market. 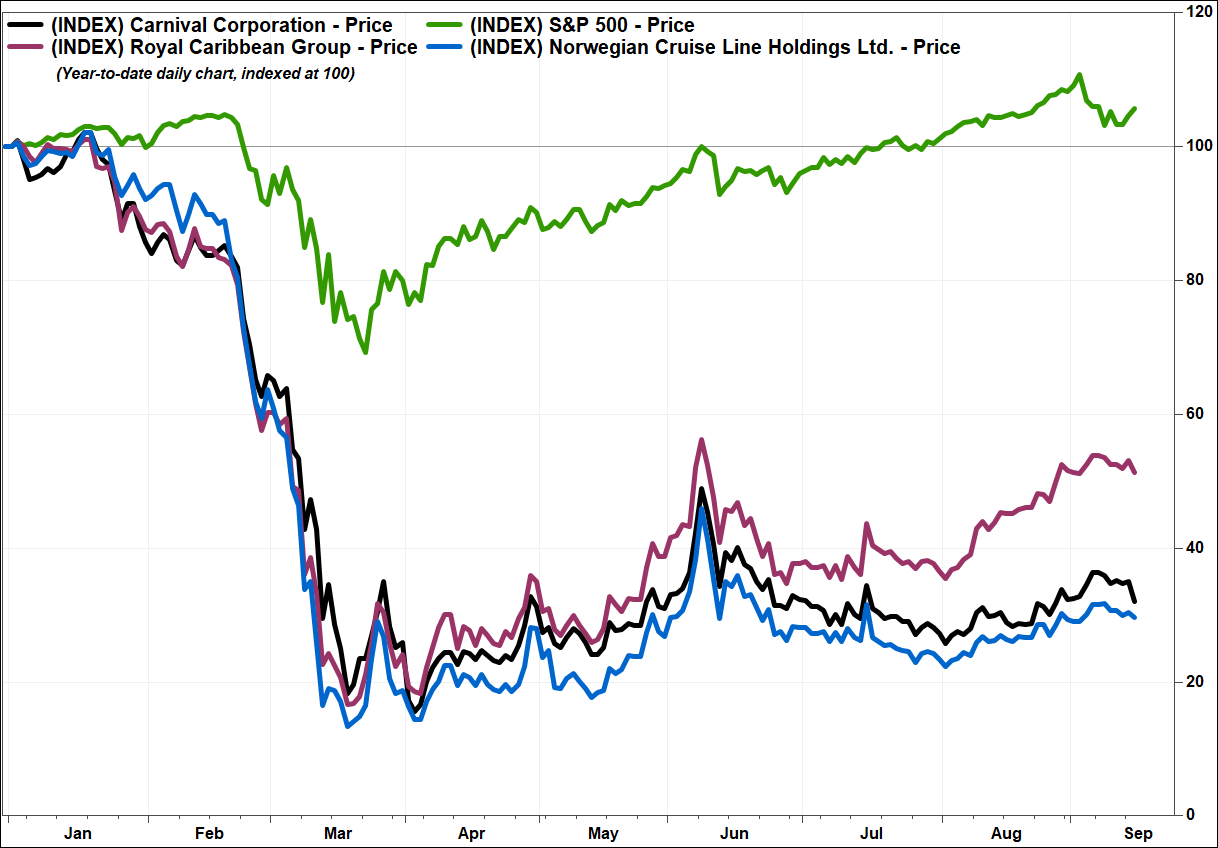 J.P. Morgan analyst Brandt Montour said Royal Caribbean Chief Financial Officer “sounded upbeat” about progress in talks with the Centers for Disease Control and Prevention (CDC) regarding the CDC’s latest no-sail order. In mid-July, the CDC extended its no-sail order to Sept. 30 from July 24, amid concerns over a new surge in COVID-19 cases.

Read more: Cruise stocks fall as CDC extension of no-sail order could be just the beginning.

In a presentation at J.P. Morgan’s gaming, lodging, restaurant and leisure management forum, Montour said Royal described its talks with the CDC as “incredibly constructive” and said the CDC was “highly responsive,” enough to make the company cautiously optimistic that the green light to start sailing could come sooner rather than later.

“Regarding timeline, in the coming week the comments collection process will close, and then the CDC is expected to more formally evaluate protocols,” Montour wrote in a note to clients. “[Royal’s] current lay-up position should allow it to restart ‘relatively quickly’ but with moderately slow/measured capacity ramp from there.”

How Tiger Woods' disastrous second round knocked him out of the...