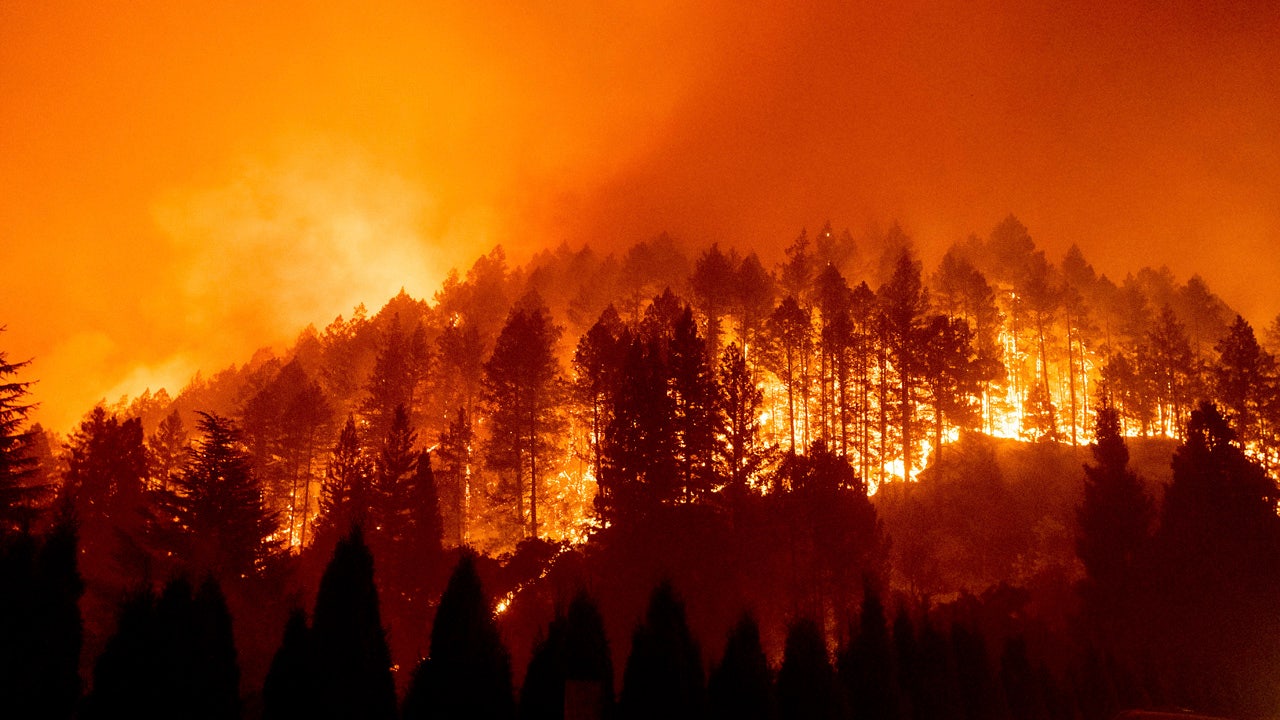 More than 50,000 utility customers were without power and others around California were urged to conserve electricity Thursday in the midst of a fall heat wave that brought another round of extreme wildfire danger.

The National Weather Service issued heat advisories through Friday for temperatures in the 90s and even triple digits in many parts of the state. Red-flag warnings were up in much of the San Francisco Bay Area where Diablo winds bringing hot, dry gusts up to 55 mph were expected to pose a threat of sparking new blazes in a region that already has seen some of the worst wildfires in state history.

Pacific Gas & Electric began shutting off power Wednesday evening to customers in portions of 24 counties, mainly in the Sierras and the San Francisco Bay Area. The affected customers ranged from 10 in Yolo County to more than 11,300 in Butte County.

“These are challenging times. Not only are we right in the peak of the wildfire season… many of us are working from home, schooling from home as well,” he said. “We recognize that hardships are introduced when we shut off power.”

PG&E’s power cuts were the third in less than two months. They aimed to prevent PG&E equipment such as power lines from sparking wildfires if they are fouled or blown down by the winds. The utility, which was blasted last year when it preemptively turned off electricity to 2 million people, said it was making an effort to use more targeted and shorter outages this time, with power expected to be fully restored by Friday night.

PG&E senior meteorologist Scott Strenfel said the forecast calls for two “back-to-back” periods when Diablo winds sweep the region. In addition to high gusts, they bring very dry air “and essentially suck the moisture out of vegetation,” leaving it tinder-dry and vulnerable to burning.

Several of the counties falling under the PG&E shutoffs already were hit by massive wildfires.

The Glass Fire that ravaged the Northern California wine country of Napa and Sonoma counties was surrounded Wednesday after destroying more than 1,500 homes and other buildings.

Farther north, the Zogg Fire in Shasta and Tehama counties was fully contained. Four people died in that blaze.

More than 8,500 wildfires have burned more than 6,400 square miles in California since the start of the year, most since mid-August. Thirty-one people have died, and more than 9,200 buildings have been destroyed.

Most of the huge fires that erupted over the past eight weeks are now fully or significantly contained but the gains could be hampered if new fires ignite, said Daniel Berlant, assistant deputy director with the California Department of Forestry and Fire Protection, known as Cal Fire.

“If a new fire breaks out, that fire will be able to grow very quickly under these conditions,” Berlant said.

PG&E’s aging equipment has sparked several major fires in recent years, including a 2018 blaze that destroyed much of the town of Paradise and killed 85 people. The utility pleaded guilty in June to 84 felony counts of involuntary manslaughter — one death was ruled a suicide — and paid $25.5 billion in settlements to cover the losses from that and other recent power line-sparked catastrophies.

Numerous studies have linked bigger wildfires in America to climate change from the burning of coal, oil and gas. Scientists have said climate change has made California much drier, meaning trees and other plants are more flammable.