A bride is accusing her parents of ruining her wedding because they aren’t able to attend — but there’s a reason why.

The bride’s stepmother posted about the incident on Reddit’s “Am I the A–h—” forum, where she explained that she and her 64-year-old husband — the bride’s father — were originally supposed to watch the bride’s three small children for the several days around the wedding.

According to the post, the bride’s father and stepmother would arrive at the bride’s apartment two days before the wedding to watch the children — all under 6 years old — get them ready for the wedding itself and then watch the kids overnight while their parents stayed at a hotel after the wedding.

“If it sounds like my husband and I [are] more babysitters than parents of the brides, [sic] celebrating her big day, well that’s because it’s probably the case,” the stepmother wrote.

Even still, she added, she and her husband agreed to help because they wanted “her big day to go smoothly and 3 kids won’t make that easier.”

However, the father of the bride had some health needs that changed their plans.

According to the Reddit post, the bride’s father underwent “intense dental surgery” last month that ended up not working. He had to schedule another operation, but the new date would be two weeks before the wedding. 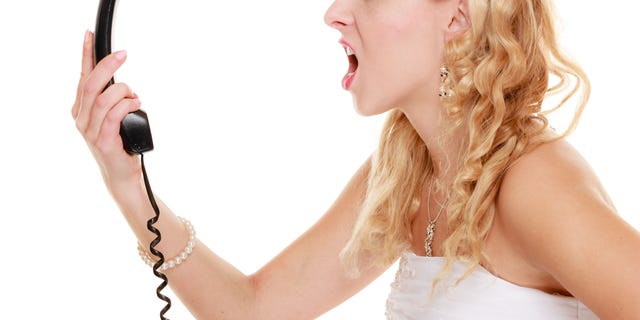 A bride accused her parents of trying to ruin her wedding because her father had to have dental surgery two weeks before and wouldn’t be able to watch her young children during the ceremony, according to a Reddit post. (iStock)

“I pressed for my husband to take it because of the agony he’s in,” the Reddit user wrote.

She said she and her husband were “heartbroken” when they called the bride a month before the wedding to explain that they would be unable to watch her children during the week of the wedding.

“I knew my husband wouldn’t [be] suitable for the drive in both his condition and with the pandemic,” the stepmother wrote. “He also wouldn’t be [able to] handle 3 kids in a small apartment. Surely, he wouldn’t be able to get proper rest.”

“I expected her to be hurt/angry, but not unhinged,” she added. “A good solid 5 minutes him and I are getting called every name in the book. She goes on to say I plotted her dad against him and I hate her and did this purposely to ruin her wedding since no one else is willing to watch the little ones, now it will be her new husband’s job. Are we the a–h—s?”

Though there were a few responses saying that the stepmother was “bailing” on the wedding, others argued that the bride was in the wrong.

“Where’s the bride’s compassion and concern for her own father … during a pandemic, no less?” one person wrote. “The step daughter sounds like a typical, entitled, bridezilla.”

Someone else asked: “How is having needed surgery bailing on a wedding?”

“Poor dental health can lead to all sorts of medical complications besides being extremely painful,” the commenter added. “Parents get sick, it wasn’t intentional. That doesn’t make them bad people because they are unable to babysit their grandkids.”

“The stepdaughter didn’t care about her dad being there and enjoying the wedding with her,” another person said. “She only wanted free childcare for 24 hours straight, and she’s only mad now because she has to find someone else to enslave on such short notice. Their only mistake was agreeing to go in the first place.”

Sean Hannity reflects on 9/11 anniversary: 'We must never forget. Always...