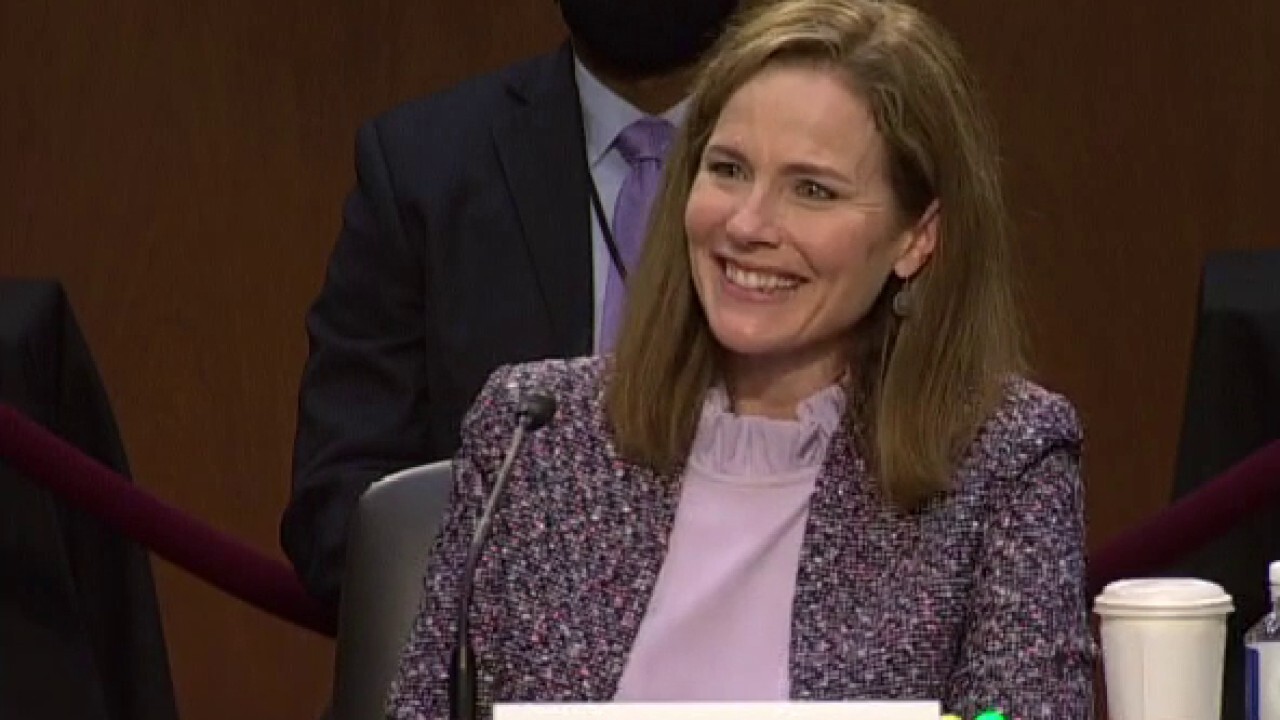 The final day of hearings for the Senate Judiciary Committee’s consideration of Supreme Court nominee Amy Coney Barrett Thursday will not feature the nominee herself but instead experts from the American Bar Association (ABA) and other outside witnesses who the senators will quiz about Barrett’s qualifications to be the high court’s next justice.

With Barrett’s portion of the hearings completed without any major gaffes or explosive moments, her confirmation before the month is out, as Republicans have repeatedly said they want, appears to be on track. On Thursday the committee will convene at 9 a.m. to officially “hold over” — or delay by one week — a vote to send Barrett’s nomination to the floor before questioning the outside witnesses.

“You will be confirmed, God willing,” Senate Judiciary Committee Chairman Lindsey Graham, R-S.C., said to Barrett as he closed her part of the hearing Wednesday evening. “I see in you someone who is not only highly qualified to be in the court and every way possible, but somebody that has broken new ground in a positive way for the country.”

Graham officially announced Wednesday the committee would “hold over” its vote on Barrett until Oct. 22, and on “Sunday Morning Futures” this week detailed his predicted timeline for her eventual confirmation. He said that after Barrett is voted out of committee he expects her to “be confirmed no later than Tuesday, a week before the election.” That timing will be up to Senate Majority Leader Mitch McConnell, R-Ky., but if Graham’s prediction holds, that would be Oct. 27.

Senators will question witnesses in two separate panels on Thursday. The first will be Randall D. Noel and Pamela J. Roberts, both private attorneys and representatives of the ABA who will testify about the ABA Standing Committee’s “Well Qualified” rating for Barrett, which is the highest possible rating it can give. There was a minority of the committee that rated Barrett “Qualified,” but the majority rating is its official rating.

The ABA rates all nominees for federal judgeships, but its ratings for nominees have been highly controversial in recent years, with Republicans occasionally accusing the standing committee of political bias and Democrats seizing on the occasional “Not Qualified” rating it has given some Trump nominees to attack the president politically.

The second panel will include eight witnesses, with the most high-profile member being retired D.C. Circuit Court of Appeals Judge Thomas Griffith. Griffith is a George W. Bush appointee who was recently involved at the appeals level with the criminal case for former National Security Adviser Michael Flynn.

Also on the panel and expected to oppose Barrett are Dr. Farhan Bhatti, the CEO and Medical Director of Care Free Medical, who is expected to discuss potential harm if the Affordable Care Act (ACA) is repealed; Stacy Staggs, a mother of twins who have preexisting conditions who is also expected to discuss the ACA; Crystal Good, a woman who was sexually abused as a child and had an abortion at 16 years old; and Kristen Clarke, the president and executive director of the National Lawyers’ Committee for Civil Rights Under Law, a liberal group.

Expected to be supportive of Barrett are University of Virginia School of Law Professor Saikrishna Prakash, who clerked for Laurence Silberman, the same D.C. Circuit judge Barrett clerked for (Prakash is also a former clerk to Justice Clarence Thomas); Amanda Rauh-Bieri, one of Barrett’s former law clerks; and Laura Wolk, a former Thomas clerk who was a student of Barrett’s at Notre Dame’s law school.

Despite what was widely considered a successful two days of testimony from Barrett, Democrats appear to remain unconvinced to vote for her. They’ve made their concerns about the nominee’s ideology and their objections to the timing of the process known.

“We shouldn’t be here, we shouldn’t be holding the Senate Judiciary Committee meeting in the midst of the election,” Sen. Dick Durbin, D-Ill., said on Wednesday. He added that the effort to confirm Barrett is “a desperate attempt by McConnell and Trump in a time we should be taking our time.”

Sen. Chris Coons, D-Del., said: “I pray that I’m wrong. I hope that I am. But in my reading of your work, nothing has alleviated my grave concerns that rather than building on Justice Ginsburg’s legacy of advancing privacy and equality and justice, I’m concerned, in fact, you will take the court in a very different direction. And so, with all due respect, I will be voting against your confirmation.”

Still, barring an unexpected Republican defection or another coronavirus outbreak in the Republican Caucus — Senate votes must be taken in person — there is little if anything Democrats can do to stop Barrett’s confirmation. Durbin said after the hearing that “if you just do the raw numbers” there is “no way to stop” Barrett from being confirmed.

There are 53 Republicans in the Senate and only two, Sens. Lisa Murkowski, R-Alaska, and Susan Collins, R-Maine, have said they oppose moving forward with Barrett’s confirmation ahead of the presidential election. Murkowski has softened her stance on the issue, leaving open the possibility of voting for Barrett based on her qualifications.

But Republicans do not need either of their votes. Assuming all 51 other members are healthy, the GOP can even lose one more before the final floor vote and still have Vice President Pence be able to break a 50-50 tie.