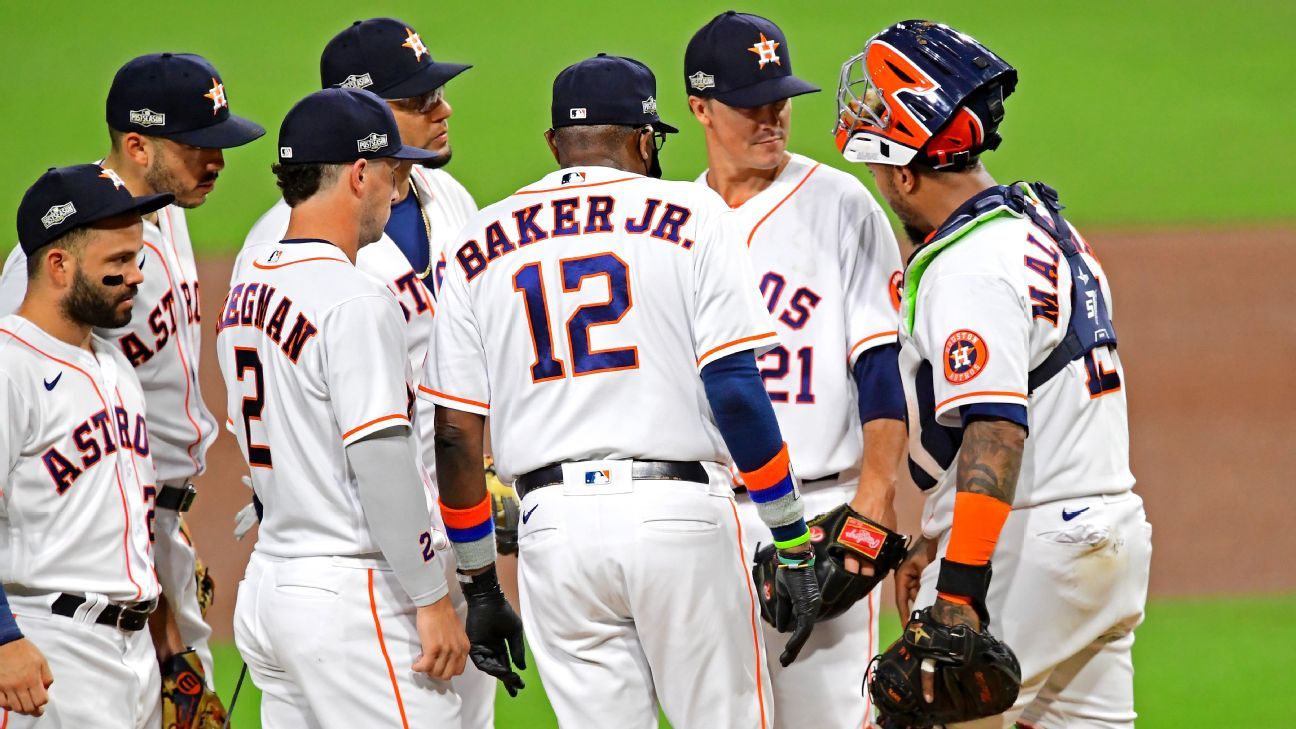 In the age of analytics in baseball, a lot of longtime fans still appreciate the old school ways. As baseball’s oldest manager, Houston‘s Dusty Baker has plenty of old school in him. It turns out his ace pitcher is pretty happy about that.

Baker bucked metrics-fueled trends in pitcher usage during the sixth inning of the Astros’ 4-3 Game 4 ALCS win over the Tampa Bay Rays on Wednesday, sticking with Zack Greinke after a mound visit at a point when many current managers would have gone to the bullpen. The decision may have saved Houston’s season, as Greinke wriggled out of a bases-loaded jam and turned over a lead over to the Astros’ bullpen. Houston still trails 3-1 in the best-of-seven series.

“I can’t lie to you, there were some prayers there on the way back to the dugout,” Baker said. “Sometimes I talk to my dad and I just get a feeling.”

Houston had just grabbed the lead in the bottom of the fifth on George Springer‘s two-run homer. But the Rays put two runners on base with one out and red-hot Randy Arozarena stepping to the plate. Baker strode to the mound to assess the situation, and returned to the dugout alone, leaving Greinke in.

Greinke struck out Arozarena on a checked swing for the second out. However, Ji-Man Choi bounced an infield single that Carlos Correa cut off from going into the outfield, preserving a run but loading the bases for Mike Brosseau. Baker had righties Cristian Javier and Ryan Pressly throwing in the bullpen.

Baker once again stuck with Greinke, who struck out Brosseau with a changeup, snuffing the Rays’ threat.

The sequence was the flip side of a recent, painful memory for Astros fans. During Game 7 of last year’s World Series, Greinke mowed through the Washington Nationals‘ lineup, shutting them down for 6 1/3 innings with a low pitch count.

Greinke then gave up a solo homer to Washington’s Anthony Rendon to cut Houston’s lead to 2-1. Greinke then walked Juan Soto. He’d faced 22 batters but thrown just 80 pitches. Yet former Astros manager A.J. Hinch did what most modern managers do with a starter is into his third time through the order. He pulled him.

Reliever Will Harris entered and Washington’s Howie Kendrick poked a two-run homer off the right-field foul pole, propelling the Nationals to the championship. Greinke admitted that the sequence was one of the lack-of-confidence instances to which he alluded.

At the time Brosseau came up with the bases loaded, Greinke had also faced 22 batters, while his pitch count was at 87. Baker’s patience was buoyed by his mound visit, during which he didn’t talk to Greinke but instead catcher Martin Maldonado, who vouched for his pitcher.

“My plan was to take him out, but I wasn’t really convinced of my plan,” Baker said. “Sometimes you look in the guy’s eyes, sometimes you listen to the catcher, and you do what you gotta do.”

Baker, 71, has long been known as a by-the-gut manager, of whom few are left around baseball. The Astros established a reputation as one baseball’s most analytically-forward organizations during their rise to prominence in recent years. But after the sign-stealing scandal that rocked the Astros and baseball last winter, Baker’s ability to relate to players and his reputation for integrity landed him the job of replacing Hinch.

Meanwhile, Greinke has long been known as one of baseball’s more cerebral and creative pitchers, if at times a bit eccentric. It turns out that Baker’s old school ability to read players and not numbers is a trait that Greinke values.

“He reads people really good and I don’t think I’ve seen him make a wrong decision when he sees [something],” Greinke said. “He’s been right 100% of the time. Not everyone has that skill. Not many people do. He’s been impressive in that regard, for sure.”

As for Baker, it’s hard for him to not have good bit of old school in him, since his managerial career began in 1993 and his playing career began at the big-league level in 1968, when Hank Aaron was among his teammates.

He mentioned the factors in the decision to leave Greinke in: The gravity of the contest, the third-time-through-the-order factor, Arozarena’s status as the hottest hitter in the playoffs and the fact that Arozarena homered off Greinke earlier in the game.

So why’d he leave him in?

Timeline of the NFL COVID-19 outbreak: How positive tests led to...