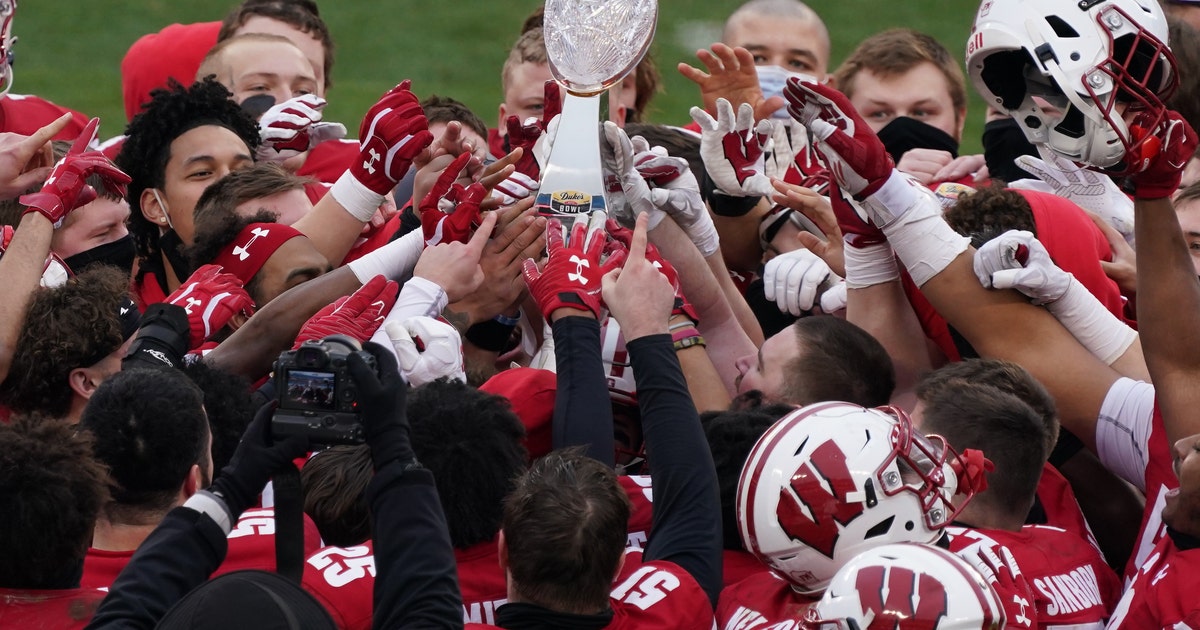 The 2020 college football season is over. Thank goodness.

Here’s hoping for a return to normalcy for the 2021 season. For the Wisconsin Badgers that would mean being back in the Associated Press top 25. Wisconsin received one vote – at No. 23 – in the final 2020 top 25 after finishing with a 4-3 record.

With several returning players, including a few seniors back for another last go-round, and potentially normal offseason workout, training and/or practice schedules, don’t count out a return to form for the Badgers.

As currently scheduled, beyond the Big Ten West teams, Wisconsin will face Penn State, Michigan, Eastern Michigan and Army at home, Notre Dame at Solider Field in Chicago and Rutgers on the road.

How does that set up Wisconsin for 2021? Well, in the way-too-early rankings we could find, the Badgers were in every top 25.

Brett McMurphy of Stadium: 15. 2021 opponents: Penn State 10, Notre Dame 14, Iowa 22. “In Wisconsin’s biggest non-conference game against Notre Dame, the Badgers won’t need to spend much time breaking down the quarterback position for Notre Dame. That’s because the Irish are expected to start graduate transfer QB Jack Coan, who started for Wisconsin in 2019. As for the Badgers, they are set at QB with Graham Mertz and also return 15 starters overall. The Badgers open the season at home against Penn State and end the regular season at home vs. Iowa. Wisconsin’s success in those games could determine its Big Ten and College Football Playoff hopes.”

Mark Schlabach of ESPN: 17. 2021 opponents: Iowa 12, Notre Dame 15, Penn State 22. “Few programs had their seasons disrupted by COVID-19 more than the Badgers, who had two games canceled and another one postponed. They looked like Big Ten West title contenders after an early 49-11 rout at Michigan, but then quarterback Graham Mertz was sidelined after testing positive for the coronavirus. Wisconsin never seemed to regain its momentum from there. Its offense also played without top wide receivers Danny Davis III and Kendric Pryor for much of the season because of concussions. The Badgers scored fewer than seven points in three straight losses. Mertz should improve after a full offseason, and Pryor has already announced he’s coming back. Jim Leonhard’s defense once again ranked in the top 10 in scoring and total defense, and with linebackers Jack Sanborn and Leo Chenal returning, the unit will be among the best in the FBS in 2021.”

Bill Bender of the Sporting News: 19. 2021 opponents: Notre Dame 6, Iowa 17, Army 24, Penn State 25. “COVID-19 wrecked Wisconsin’s season before it really started, and the offense was hit or miss with quarterback Graham Mertz. The rushing attack needs to be rebuilt, but the defense returns enough talent among the back seven to re-establish the Badgers in the Big Ten West. Iowa, Northwestern and Michigan all have to come to Camp Randall Stadium, too.”

Kerry Miller of Bleacher Report: 16. 2021 opponents: Notre Dame 11, Iowa 17, Penn State 20. “Give that young offense another year to jell and pair it with a defense that typically ranks among the best in the nation, and Wisconsin should be the favorite to win the Big Ten West.”

Matt Murschel of the Orlando Sentinel: 12. 2021 opponents: Notre Dame 8, Iowa 19, Penn State 22. “The Badgers struggled to find their footing during the 2020 season as COVID-19 issues forced the cancellation of several games. The Badgers did, however, show some positive signs they can take into next season as Graham Mertz emerged as a solid contributor at quarterback and the defense was among the best in the Big Ten in scoring (17 points per game) and total defense (300 yards per game).”

AJ Schulte of Pro Football Network: 24. 2021 opponents: Notre Dame 9, Iowa 16, Penn State 18. “Wisconsin was a little hit-or-miss with Graham Mertz at QB, but there’s no doubt that the team has the talent to succeed on both sides of the ball. The running game isn’t close to what it was last year with no Jonathan Taylor, but adding OTs like Nolan Rucci will help the OL improve. With defensive leaders like Jack Sanborn returning, Wisconsin looks to keep chugging along.”

Steve Lassan of Athlon Sports: 11. 2021 opponents: Notre Dame 9, Iowa 14. “Due to COVID-19 and player absences and injuries, it’s hard to read too much into Wisconsin’s 4-3 record in 2020. The Badgers have been a model of consistency by winning at least eight games in five full years under coach Paul Chryst and claimed three out of the last five Big Ten West Division titles. Defense was the strong suit for Chryst’s team in 2020 and should rank as one of the best in the Big Ten once again. … The 2021 schedule breaks favorably for the Badgers. Penn State, Michigan, Army, Northwestern and Iowa all visit Camp Randall Stadium. An intriguing non-conference battle against Notre Dame is set for Soldier Field in late September.”

R.J. Young of FOXSports.com: 16. 2021 opponents: Iowa 11, Notre Dame 12, Penn State 14, Army 19. “Pair Graham Mertz with running back Jalen Berger and tight end Jake Ferguson for another year, let Badgers defensive coordinator Jim Leonhard cook, and the Badgers should be one of the two best teams in the Big Ten West. The schedule features a big matchup against Notre Dame on Sept. 25 and a trap game against Army on Oct. 16.”

Erick Smith of USA Today: 14. 2021 opponents: Notre Dame 8, Penn State 16, Iowa 18, Michigan 22. “Not much went right for the Badgers in 2020. They lost their starting quarterback before the season, then were hit with a COVID-19 outbreak that impacted new starter Graham Mertz. Losses at receiver and a surprisingly ineffective running game also were issues. Much of those problems will be solved. Mertz should be more comfortable in his second season and points won’t be so difficult to generate. The defense, like previous seasons, will again be one of the best in the country with Jack Sanborn and Leo Chenal anchoring the linebacker group.”

Connor O’Gara of Saturday Down South: 19. 2021 opponents: Notre Dame 8, Iowa 16, Penn State 20. “ven though the Graham Mertz hype train got rolling a little too fast for its own good in 2020, Wisconsin will still be a Big Ten West contender in 2021. Mertz will benefit from not having a herky-jerky season that decimated Wisconsin’s skill positions. If Wisconsin retains defensive coordinator Jim Leonhard, the Badgers should again boast a top-10 defense. Jack Sanborn will return to lead a group that has significant experience at all 3 levels. Wisconsin needs to figure out some help at cornerback, and Mertz’s upside is limited if Danny Davis and Kendric Pryor leave, but it’d be foolish to bet against Paul Chryst to roll out a Top-25 team from the jump.”

Bobby Jindal: Biden may find support for some proposals among populist...