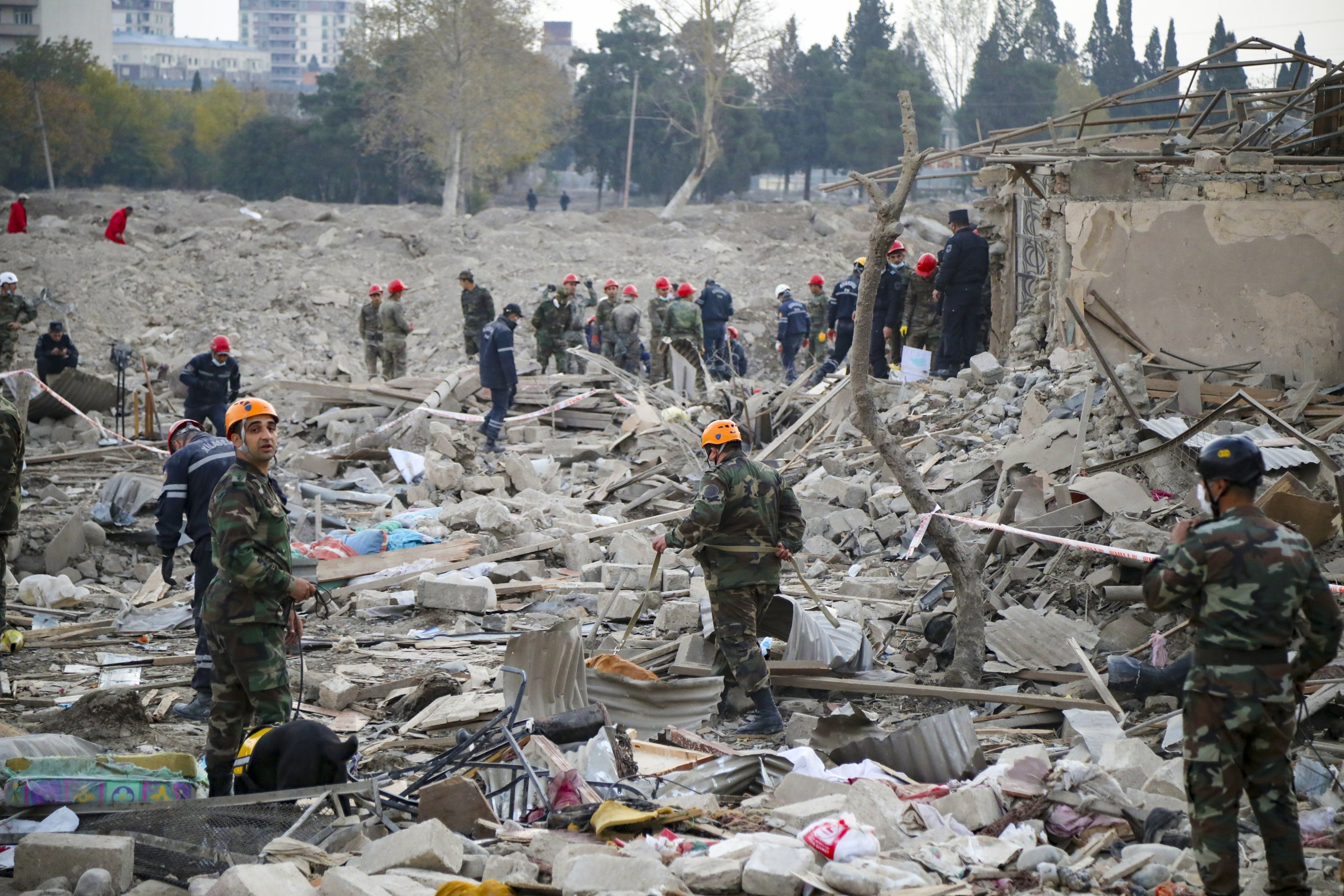 BAKU, Azerbaijan (AP) — Azerbaijan on Saturday accused Armenia of striking its second-largest city with a ballistic missile that killed at least 13 civilians and wounded 50 others in a new escalation of their conflict over Nagorno-Karabakh.

The Armenian Defense Ministry denied launching the strike, but the separatist authorities in Nagorno-Karabakh put out a statement listing alleged “legitimate” military facilities in the city of Ganja, although they stopped short of claiming responsibility for the attack.

Azerbaijani officials said the Soviet-made Scud missile destroyed or damaged about 20 residential buildings in Ganja overnight, and emergency workers spent hours searching in the rubble for victims and survivors.

Scud missiles date back to the 1960s and carry a big load of explosives but are known for their lack of precision.

In a televised address to the nation, Azerbaijan’s president, Ilham Aliyev, denounced the missile strike as a war crime and warned the leadership of Armenia that it would face responsibility.

“Azerbaijan will give its response and it will do so exclusively on the battlefield,” Aliyev said.

While authorities in both Azerbaijan and Armenia have denied targeting civilians, residential areas have increasingly come under shelling amid the hostilities that have raged for three weeks despite Russia’s attempt to broker a cease-fire.

Nagorno-Karabakh lies within Azerbaijan but has been under the control of ethnic Armenian forces backed by Armenia since a war there ended in 1994. The latest outburst of fighting that began on Sept. 27 has involved heavy artillery, rockets and drones, marking the largest escalation of hostilities between the South Caucasus neighbors in more than a quarter-century.

Aliyev announced Saturday that Azerbaijani forces have taken the town of Fizuli and seven villages around it, gaining a “strategic edge.”

Fizuli is one of the seven Azerbaijani regions outside Nagorno-Karabakh that was seized by the Armenian forces during the war in the early 1990s.

Russia, which has a security pact with Armenia but has cultivated warm ties with Azerbaijan, hosted top diplomats from both countries for more than 10 hours of talks that ended with Saturday’s cease-fire deal. But the agreement immediately frayed, with both sides blaming each other for breaching it.

Russian Foreign Minister Sergey Lavrov urged his Armenian and Azerbaijani counterparts to abide by the truce. He also emphasized the importance of the Moscow agreement to start substantive talks on a peaceful settlement between the two nations.

Azerbaijan has insisted it has the right to reclaim its land by force after efforts by the so-called Minsk group of international mediators that comprises Russia, the United States and France failed to yield any progress after nearly three decades. Azerbaijan has actively pushed for its ally Turkey to take a prominent role in future peace talks.

Turkish Defense Minister Hulusi Akar spoke on the phone with his Azerbaijani counterpart, congratulating Azerbaijan on “liberating Fizuli from the occupation” and downing Armenian jets.

The Azerbaijani military declared Saturday that they downed an Armenian Su-25 jet, a claim quickly dismissed by Armenia’s Defense Ministry.

The Armenian military said they downed three Azerbaijani drones over the territory of Armenia on Saturday. Azerbaijan denied that.

Drones and rocket systems supplied by Turkey have given the Azerbaijani military an edge on the battlefield, helping them outgun the Armenian forces that rely mostly on outdated Soviet-era weapons.

C-SPAN suspends Steve Scully indefinitely after he admits he lied about...