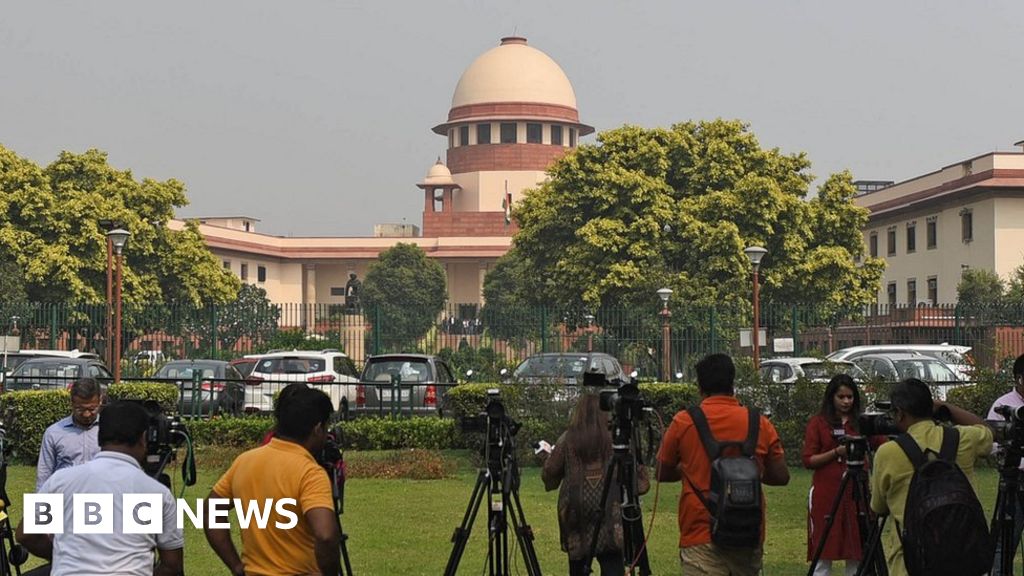 India’s Supreme Court is due to make a long-awaited ruling on a disputed religious site in the northern holy city of Ayodhya.

Officials have appealed for calm, and thousands of police and paramilitary troops have been deployed in the city in Uttar Pradesh state.

Hundreds of people were detained on Friday amid fears of violence.

Hindus and Muslims have for decades been bitterly divided over the 16th Century Babri mosque in Ayodhya.

The court case centres on the ownership of the land and has been dragging on in the Supreme Court for years.

Hindus believe that the site of the mosque is the birthplace of one of their most revered deities, Lord Ram, and they want to build a temple there. Muslims, however, say they have worshipped there for generations.

Schools and colleges in the area have been closed and all roads leading to the site have been blocked by police.

“We will not tolerate Hindus or Muslims publicly displaying their reaction to the court verdict,” he said.

Government departments say they have also made preparations to deal with any violence.

“Each and every security officer is committed to prevent minor skirmishes or large-scale riots after the court delivers its verdict,” said one senior home ministry official, who declined to be named.

“State governments have identified several schools to set up temporary jails if the need arises.”

On Twitter, Prime Minister Narendra Modi appealed for calm and urged everyone to respect the verdict.

“Whatever the verdict… it won’t be anybody’s win or loss,” he said.

“My appeal to the people of India is that our priority is to ensure the verdict strengthens the values of peace, equality and goodwill of our country.”

Police said on Friday that more than 500 people had been detained in the run-up to the verdict and most were being kept in custody.

What is the dispute about?

At the centre of the row is the 16th Century mosque that was demolished by Hindu mobs in 1992, sparking riots that killed nearly 2,000 people.

Many Hindus believe that the Babri Masjid was constructed on the ruins of a Hindu temple that was demolished by Muslim invaders.

Muslims say they offered prayers at the mosque until December 1949 when some Hindus placed an idol of Ram in the mosque and began to worship the idols.

Over the decades since, the two religious groups have gone to court many times over who should control the site.

Since then, there have been calls to build a temple on the spot where the mosque once stood.

Hinduism is India’s majority religion and is thought to be more than 4,000 years old. India’s first Islamic dynasty was established in the early 13th Century.

Who is fighting the case?

The long and complicated property dispute has been dragging on in various courts for more than a century.

This particular case is being fought between three main parties – two Hindu groups and the Muslim Waqf Board, which is responsible for the maintenance of Islamic properties in India.

The Hindu litigants are the Hindu Mahasabha, a right-wing political party, and the Nirmohi Akhara, which is a sect of Hindu monks.

They filed a title dispute in the Allahabad High Court in 2002, a decade after the mosque was demolished.

A verdict in that case was pronounced in September 2010 – it determined that the 2.77 acres of the disputed land would be divided equally into three parts.

The court ruled that the site should be split, with the Muslim community getting control of a third, Hindus another third and the Nirmohi Akhara sect the remainder. Control of the main disputed section, where the mosque once stood, was given to Hindus.

It affirmed the disputed spot was the birthplace of Lord Ram, that the Babri Masjid was built after the demolition of a Hindu temple, and that the mosque was not built in accordance with the tenets of Islam.

The Supreme Court suspended this ruling in 2011 after both Hindu and Muslim groups appealed against it.