If Americans are concerned that President Donald Trump and Republicans are moving the US toward becoming a one-party, authoritarian state, they are running out of time to stop them, experts warned.

Trump has exhibited autocratic impulses since his 2016 campaign and from the moment he entered the White House.

The president has attacked virtually every democratic institution in the US when he’s felt its actions were unfavorable to his agenda or public appearance. Meanwhile, he pushed traditional US allies away while openly embracing many of the world’s most repressive leaders.

These trends have raised concern among top experts on authoritarianism, fascism, and democracy, but they’ve often said that the robust political system in the US, with its checks and balances and constitutional norms, has prevented Trump from becoming a full-blown authoritarian and doing whatever he wants.

Since Trump was acquitted in the Senate earlier this month after being impeached in the House over his dealings with Ukraine, there’s been a White House purge of impeachment witnesses, and Attorney General William Barr has intervened in the trial of a close associate of the president, Roger Stone. And the experts’ tone has changed dramatically.

‘Someone has got to push back’

“There need to be mass protests,” he said. “The Republican Party is betraying democracy, and these are historical times. Someone has got to push back.

“The deeply worrying moment is when you start to become a one-party state,” Stanley added. “The Republican Party has shown that it has no interest in multi-party democracy … They are much more concerned with power, with consolidating power.”

Stanley said recent actions by Republicans and Trump were “straight from the literature on authoritarianism.”

Only one Republican, Sen. Mitt Romney of Utah, voted to convict Trump of abuse of power in his Senate impeachment trial. Romney was also one of just two GOP senators to vote in favor of an ultimately failed motion to call witnesses. (All 15 Senate impeachment trials before Trump’s had witnesses.) With their vote, Republicans blocked potentially crucial testimony from the president’s former national security adviser John Bolton.

Romney, the 2012 GOP presidential nominee, has since been excoriated by fellow Republicans and treated as a pariah.

Stanley said there should have been mass protests in the streets after the vote against witnesses, warning that the absence of significant public outcry served as “a further sign to the party in power that they can go ahead and do what they want.” 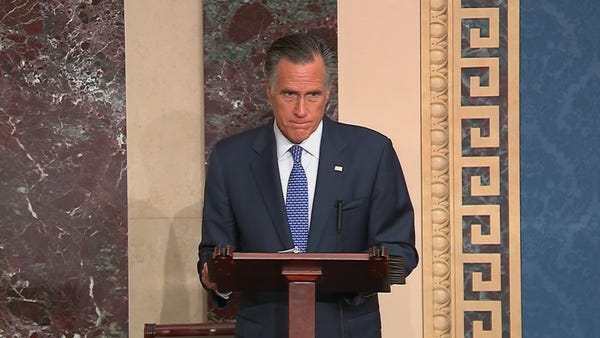 Sen. Mitt Romney announces his intention to vote to convict Trump of abuse of power on February 5. Reuters

Trump urged Ukraine, a vulnerable US ally, to dig up dirt on his political rivals during a reelection year — including on former Vice President Joe Biden, who until recent electoral setbacks was thought to be the leading contender for the 2020 Democratic presidential nomination. And Trump did so while withholding almost $400 million in vital, congressionally approved military aid from Kyiv as it fights a war against pro-Russian separatists.

There was a mountain of evidence that Trump directed a broad, complex scheme to essentially blackmail Ukraine into smearing his political opponents, but not all of the evidence was delivered under oath, because Republicans prevented key witnesses from testifying.

Several Senate Republicans decried Trump’s actions toward Ukraine but still voted to acquit him. One such Republican, Sen. Lisa Murkowski of Alaska, conceded that she hadn’t seen changes in Trump’s behavior since his impeachment, despite her colleague Sen. Susan Collins of Maine recently suggesting that the president had learned a lesson.

“There haven’t been very strong indicators this week that he has,” Murkowski told reporters on Wednesday.

‘There is absolutely no reason for him to stop pushing’

“From the moment he entered the Republican primary in 2015 to his impeachment five years later, Donald Trump has ignored advice to moderate and change and, in his view (which is largely correct), won. He has tested the boundaries of people and institutions several times and found them to be bendable and weak,” said Cas Mudde, a political scientist at the University of Georgia who’s an expert on populism, extremism, and democracy.

“There is absolutely no reason for him to stop pushing,” he added. “It goes against both his personality and his experience.”

Mudde said the only question is whether there is still a breaking point for the Republican Party.

“Note that Trump has not changed the institutions, so the powers are still there,” he said. “This is all about the courage and willingness of Republicans to stand up for the rule of law and to the president.”

Within a week, Barr intervened in Stone’s trial, calling for a lesser sentence for the longtime GOP strategist than the one recommended by prosecutors who’d been working on the case.

On Twitter, Trump celebrated the controversial intervention, which led to the withdrawal or resignation of all four prosecutors working on Stone’s case. “Congratulations to Attorney General Bill Barr for taking charge of a case that was totally out of control and perhaps should not have even been brought,” the president said.

‘They’ll do whatever they can to hold on to power’

While the president applauded the attorney general, Stanley described Barr as a “dangerous, authoritarian enabler,” adding that Trump and those in his administration were not the only issues when it comes to an anti-democratic slide in the US.

“It’s almost all of the Republican Party,” Stanley said. “Mitch McConnell already showed that he has no loyalty to the rule of law when he denied Obama the right to appoint Supreme Court justices … It’s a much deeper problem.”

He added: “We need conservatives and Republicans to stand up for the rule of law, and if we don’t have that, it’s over.” 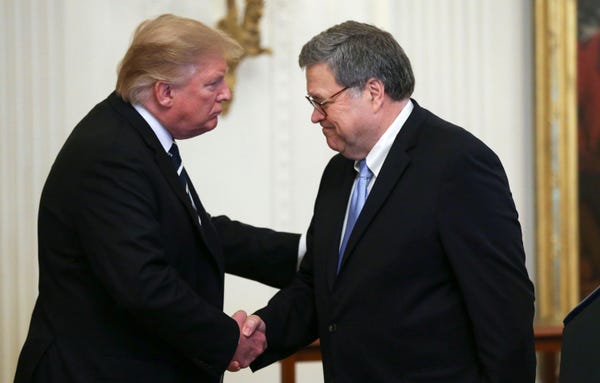 Ruth Ben-Ghiat, a historian at New York University who’s an expert on authoritarianism, told Insider that the resignations of the prosecutors over the interference with Stone’s sentencing sent “a powerful message of protest.”

“For Trump and Barr, though, this is likely ‘good riddance to bad eggs,'” Ben-Ghiat said.

If Americans are truly concerned with Trump’s “abuse of power,” Ben-Ghiat said, the best strategy is for voters to mobilize and use “their electoral power to vote out these authoritarians while they still can.”

But with a president who was just impeached on allegations that he solicited foreign election interference, and with Republican lawmakers who appear fully willing to enable his behavior, Stanley said he was not particularly optimistic about Election Day in November.

“I don’t know what would happen in the absence of mass protests,” Stanley said. “I’m not at all sanguine about the fairness of the upcoming elections.”

He added: “As they’ve shown, they’ll do whatever they can to hold on to power.”