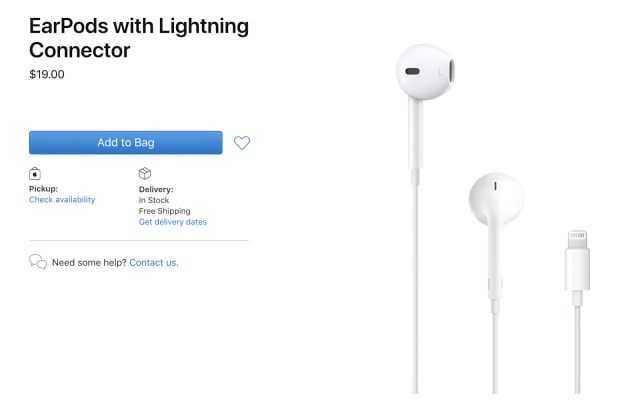 Apple made its EarPods and new power adapter for the iPhone a bit more affordable after confirming that the new iPhones will no longer ship with accessories. The tech giant now sells the EarPods with Lightning connector on the Apple Store for $19 (as noticed by MacRumors), down $10 from its original price. At the same time, the new 20W power adapter for the iPhone also costs $19, which is $10 less than the old adapter the company has discontinued.

It has long been rumored that the new iPhones won’t come with the EarPods and the charger old models used to come with. And that turned out to be true, which does’t really come as a huge surprise, seeing as the new Apple Watches shipped without chargers. Apple cited environment reasons for the move when it announced the iPhone 12, explaining that shipping without accessories would reduce its products’ manufacturing needs.

The company also said that most people have switched to wireless earbuds anyway and that removing the accessories would allow it to ship its devices in smaller boxes. To note, those devices include the iPhone 11, XR and SE, which Apple will also start shipping without EarPods and chargers. The lower prices definitely sound welcome if you don’t have old chargers and EarPods lying around and getting them for free with a new iPhone is no longer an option. That said, you can probably get them cheaper from Amazon and other retailers if you wait for the right deals to show up.

In this article: Apple, EarPods, power adapter, Apple Store, news, gear
All products recommended by Engadget are selected by our editorial team, independent of our parent company. Some of our stories include affiliate links. If you buy something through one of these links, we may earn an affiliate commission.