Michigan‘s attorney general has filed charges against an eighth person in what authorities have described as a scheme to storm Michigan’s Capitol building and kidnap officials, including Gov. Gretchen Whitmer, a spokesman said Thursday.

Ryan Jarvi, a spokesman for Attorney General Dana Nessel, told The Associated Press that an additional person has been charged but provided no further details.

Seven men purportedly linked to a paramilitary group called the Wolverine Watchmen were charged in state court last week with providing material support for terrorist acts and possession of a firearm while committing a felony. 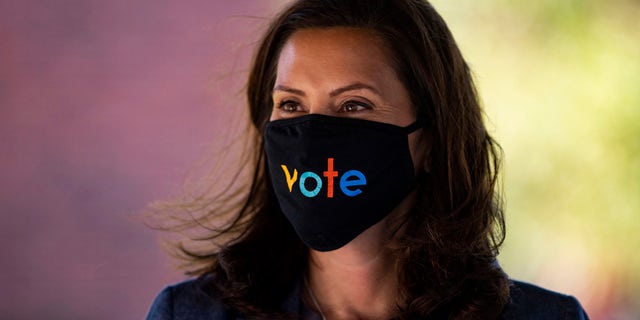 Michigan Gov. Gretchen Whitmer wears a mask with the word “vote” displayed on the front during a roundtable discussion on health care, Wednesday, Oct. 7, 2020, in Kalamazoo, Mich. (Nicole Hester/Ann Arbor News via AP)/

Federal charges were filed against six others in the alleged conspiracy to kidnap Whitmer.

Nessel said last week that some of the Wolverine Watchmen suspects had taken part in surveillance of Whitmer’s vacation home in northern Michigan.

She said the state suspects had planned and trained for an operation to attack the Capitol in Lansing and had threatened violence in hopes to ignite a civil war.