The remains of an Anglo-Saxon warlord have been uncovered in southern England, in a pagan burial site that experts say lain undisturbed for more than 1,400 years.

Archaeologists uncovered the 6th century A.D. skeleton in Berkshire, according to a statement released by the U.K.’s University of Reading. The remains of the ancient warrior dubbed the “Marlow Warlord,” were found in a hilltop burial site alongside an array of weapons, including a sword in a decorated scabbard and spears.

LOST ANCIENT MONASTERY MAY HAVE BEEN DISCOVERED

The warrior is described as a “commanding, six-foot-tall man,” by the University of Reading, which notes that the site was first discovered by two metal detectorists, Sue and Mick Washington, in 2018.

“On two earlier visits I had received a large signal from this area which appeared to be deep iron and most likely not to be of interest,” said Sue Washington, in the statement released by the university. “However, the uncertainty preyed on my mind and on my next trip I just had to investigate, and this proved to be third time lucky!” 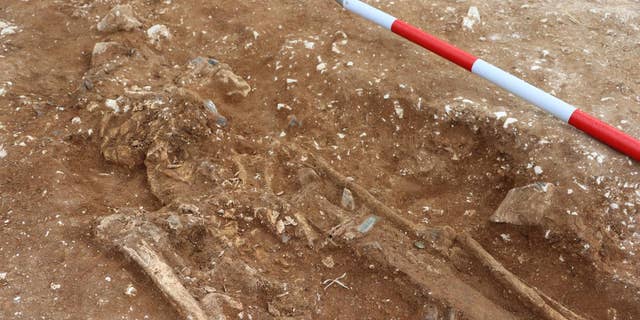 The remains of the Anglo-Saxon warlord. (The University of Reading)

Sue and other members of the Maidenhead Search Society metal detecting club had visited the site on several locations, where she initially uncovered two bronze bowls. The metal detectorist registered the find with the Portable Antiquities Scheme, run by the U.K. Government and the British Museum, which undertook its own excavation, unearthing two bronze spearheads.

The bowls, which were donated by Sue, and the spearheads, are set to go on display in the Buckinghamshire Museum in Aylesbury.

With the site identified as a likely Anglo-Saxon grave, the Department of Archaeology at the University of Reading completed a full survey and excavation in August 2020.

“This guy would have been tall and robust compared to other men at the time, and would have been an imposing figure even today,” said Dr. Gabor Thomas, a specialist in early medieval archaeology at the University of Reading, in the statement. “The nature of his burial and the site with views overlooking the Thames suggest he was a respected leader of a local tribe and had probably been a formidable warrior in his own right.” 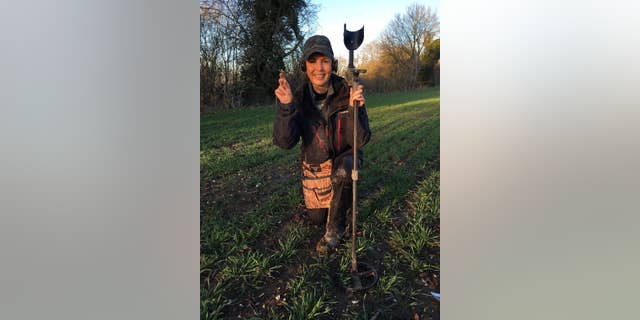 The sword and scabbard, along with other items unearthed, such as spears, and bronze and glass vessels, are being conserved by Pieta Greaves of Drakon Heritage and Conservation, according to the University of Reading. Additional analysis of the human remains will be undertaken by the University’s Archaeology department in an effort to determine his age, health, diet and origins.

The U.K. continues to reveal new aspects of its rich history. In a separate project earlier this year, archaeologists said they are confident they have uncovered the remains of a lost Anglo-Saxon-era monastery.

Other discoveries from the Anglo-Saxon era have been garnering attention in recent years. Last year, for example, archaeologists revealed new details of the earliest Christian royal burial ever found in Britain, which they compared to the famous King Tutankhamun’s tomb.

In 2003, road workers in the village of Prittlewell, in southern England, accidentally uncovered a 1,400-year-old Anglo-Saxon tomb, which was then excavated by archaeologists. The discoveries include a gold buckle, which indicates a high-status burial, possibly a prince. Two small gold-foil crosses found at the head of the coffin suggest a Christian burial.

Flood Advisory issued November 29 at 8:57AM AKST by NWS

Special Weather Statement issued November 30 at 6:46AM EST by NWS

Severe Weather Statement issued November 30 at 6:28AM EST by NWS