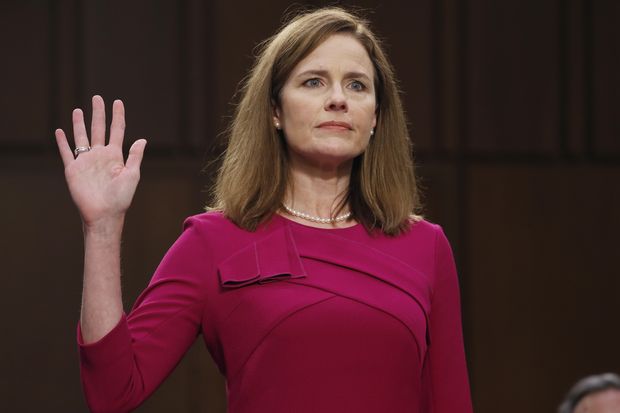 Man-made climate change — the long-run threat to the global economy and security that serves as the basis for competing clean-energy bills by both parties — is a controversial topic still up for public debate, so off limits for her, Supreme Court nominee Amy Coney Barrett said Wednesday.

Pressed on the subject for a second day of confirmation hearings, most recently by Sen. Kamala Harris, the Democratic vice-presidential nominee, Barrett ducked the topic when posed by the senator as a public health threat along the lines as smoking, saying the issue remains politically controversial.

Harris, recalling previous comments by the nominee, said Barrett “made clear” she believes climate change is debatable, pressing the judge again by asking: “Do you believe it is happening and that it affects the air and environment?”

Barrett’s response left most climate-policy operatives honing in on what to them sounded like climate-change denial in the face of a scientific consensus. Barrett called the topic still a matter of public controversy.

“ ‘I will not express a view on a matter of public controversy, especially when it’s politically controversial.’ ”

During questioning a day earlier, Sen. John Kennedy, Republican of Louisiana, also asked the nominee her thoughts on climate change. Barrett responded, “I’ve read about climate change. I’m certainly not a scientist. I would not say that I have firm views on it.”

The left-leaning policy bloc Climate Power 2020 responded to Barrett’s remarks during Tuesday’s hearing. “It is disqualifying for a Supreme Court nominee in 2020 to refuse to acknowledge that climate change is real. Amy Coney Barret may not be a scientist, but the science is not up for debate,” said the group’s executive director Lori Lodes. “The Supreme Court regularly has the last word on clean air, clean water and climate, and we cannot afford another justice who rejects science when interpreting our laws.”

“ ‘I’m certainly not a scientist. I would not say that I have firm views on [climate change].’ ”

The Trump administration has rolled back hundreds, sometimes decades-old, environmental regulations largely at the behest of fossil-fuel lobbyists, citing cost and uneven enforcement — many are rule reversals that are or could be subject to lawsuits.

Read: Fracking and the ‘Green New Deal’: Here’s where Trump and Biden stand on climate change

Republican lawmakers have advanced versions of clean-energy bills that favor carbon capture as a way to lower pollution. They are pushing now economically-viable solar and wind power in an energy mix that includes natural gas. Democrats have advanced their own versions that are more restrictive on fossil fuels.

Opinion: After underperforming the stock market for years, alternative energy is red hot

: ‘Why don’t any of the signs say Kamala?’ my 6-year-old daughter asked me

NerdWallet: Why are fewer students seeking financial aid for college?

A Word from the Experts: People of color shouldn’t be treated...

Key Words: How stocks could react to a spike in COVID-19...