ROME — A 20-year-old California man charged with murdering an Italian police officer apologized in court Wednesday, saying he was “filled with remorse” and hoped one day the slain man’s family would forgive him.

Finnegan Lee Elder, who has been on trial in Rome since February along with a fellow American, asked the court for permission to make a spontaneous statement that, he said, he finally had summoned the courage to give.

Elder said the night of July 26, 2019, when Vice Brigadier Mario Cerciello was fatally stabbed on a Rome street, was the worst of his life “because I took a man’s life, I took a husband away from his wife, I broke a bond between brothers and I took a son away from his mother.” 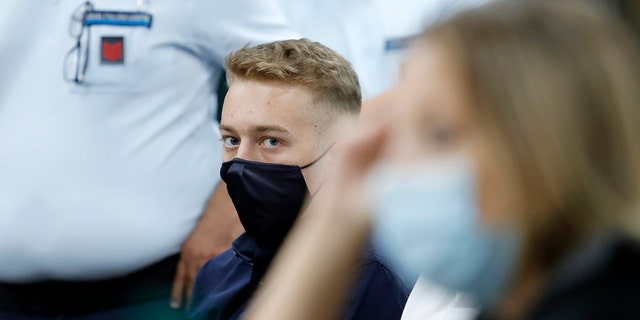 Finnegan Lee Elder, from California, looks on during a break in his trial where he and his friend Gabriel Natale-Hjorth are accused of slaying a plainclothes Carabinieri officer while on vacation in Italy last summer, in Rome, Wednesday, Sept. 16, 2020. (Remo Casilli/Pool Photo via AP)

“I’ll never be able to forgive myself for this, and I don’t expect Mr. Mario Cerciello’s family to ever forgive me, although I truly hope one day they will,” he said.

Elder and his friend, Gabriel Natale-Hjorth, 19, were visiting Italy as tourists when Cerciello and another plainclothes carabinieri officer approached them on the street after the young men were involved in a botched drug deal.

Prosecutors alleged that in the ensuing scuffle, Elder stabbed Cerciello 11 times and that Natale-Hjorth hid the murder weapon, a military-style attack knife that Elder allegedly brought in a suitcase from the United States.

The defense has insisted the Americans didn’t realize the two Italians were police officers, didn’t see any badges and thought the men who approached them were criminal thugs. 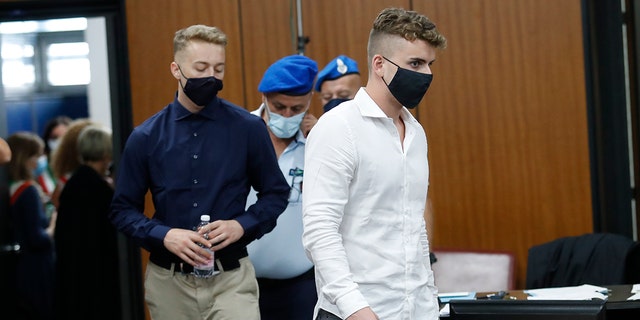 Gabriel Natale-Hjorth, right, and Finnegan Lee Elder, from California, arrive in court for a hearing in their trial where they are accused of slaying a plainclothes Carabinieri officer while on vacation in Italy last summer, in Rome, Wednesday, Sept. 16, 2020. (Remo Casilli/Pool Photo via AP)

Elder, who wore a mask as he entered the courtroom, said he had been struggling ever since that night, but was able to reflect on what happened while in prison. He recalled his mother wrote to Cerciello’s family months ago, expressing his anguish and desire to apologize.

“But I didn’t have the courage to write or speak out” until Wednesday, Elder said.

“I understand that maybe it’s impossible to gain forgiveness from someone who lost a loved one, but I wanted to be honest that my desire is sincere,” he said. “All I can say is that I’m filled with remorse and it pains me to think of the suffering I’ve caused.”

Cerciello, who was killed soon after returning from his honeymoon, was hailed as a national hero at his funeral.