Earlier this week, workers at an Amazon warehouse in Staten Island, New York, were told an employee in the facility tested positive for COVID-19, the disease caused by the novel coronavirus.

Then they went back to work.

“After they told us, the building was just running as it has been,” said Terrell Worm, an Amazon worker in Staten Island and member of Make the Road New York, an activist group. “It’s like they didn’t even say anything; it was just business as normal,” he said on a conference call organized by Athena, an anti-Amazon coalition of groups, with reporters Wednesday.

Amazon workers are on the frontlines of the coronavirus pandemic, helping get food and necessities delivered to millions of Americans who are house-bound. Company founder and CEO Jeff Bezos, the richest man on earth, has said he’ll do everything he can to keep his employees safe.

But workers don’t feel that way. “To watch Amazon executives say they are protecting workers is infuriating,” one New England driver told HuffPost, asking for anonymity to protect their job.

At least 10 Amazon warehouse workers have been diagnosed with COVID-19 as of Thursday, according to public reports. Employees say many more are likely sick. The company is not making cases public; news about cases have filtered out via warehouse workers. The company just shut down a Kentucky warehouse because of the outbreak, only after staffers protested because three workers tested positive for coronavirus.

Warehouse workers and delivery drivers say they lack protective gear like goggles, masks and gloves. And that they don’t have adequate amounts of sanitizer to wipe down their workstations and are working close together ― despite the Centers for Disease Control and Prevention guidelines that recommend social distancing. Meanwhile, the amount of work is staggering.

“It is very dangerous and scary. I’m scared for my own safety and the safety of my own community,” said Monica Moody, who works at an Amazon warehouse in Concord, North Carolina, near Charlotte, speaking on another call with workers and activists on Tuesday.

Workers are still gathering in groups of 10 or more, she said. And there are rumors that colleagues have tested positive for COVID-19.

“We’re all freaked out,” said Moody, who is a member of United for Respect, which advocates for retail workers. “Amazon is making us choose between coming to work or risk losing pay.”

The pressure is on to keep working ― longer hours and at faster speeds. And while Amazon has unveiled a host of measures meant to cope with the pandemic, there are two policies that truly tell the tale: The company is offering unlimited unpaid leave to anyone who doesn’t want to risk coming to work. Meanwhile, workers who do come in are making $2 more per hour and are paid double when working overtime.

It’s a fraught choice. “You’re either getting a lot of money or you’re sitting at home worried about the bills,” said Jana Jumpp, a United for Respect member who works in a Jeffersonville, Indiana, Amazon fulfillment center and spoke on the call Wednesday. “The only choice we have is to take time off without pay or be exposed to this virus.”

Some of her colleagues aren’t as worried, she said. “I’ve had people say, ‘I don’t care if I’m sick, I want to get that money,’” she added.

Jumpp is 58 years old and has loved working at Amazon until recently, she said. Now she’s taking unpaid time off.

“I’m scared to go back,” she said. “There is nowhere near enough protection in our facility; people are not given hand sanitizer, wipes or masks.”

‘They Push Us And Push Us’

The situation also appears dire for the company’s army of contract workers, including its fleet of drivers who are either independent contractors or who work for small local companies that manage fleets of vans and cars delivering packages ― under immense pressure.

“We’re not social distancing,” said the driver in New England, who works for a contractor and spoke with HuffPost last week.

Drivers crowd into a group in the morning before they set out on their routes for the day. They’re not given sanitizing wipes or any kind of protective gear to stay safe on the road. And with business increasing right now, drivers are being pushed to deliver packages as fast as possible.

“We’re being pushed really hard to do our routes. As many as we can. I mean they push us and push us,” the driver said, adding that there’s no time to stop for bathroom breaks or even to eat.

And, though this driver was able to buy some sanitizing wipes, there’s no real time to try to keep packages clean. “I try to wipe down the van and wipe my hands but we can’t sit there and wipe down packages.”

What Happens When A Worker Gets Sick

If a worker tests positive in a warehouse, employees in the facility are told about the situation, an Amazon spokesperson told HuffPost. But often, employees start out by hearing rumors. 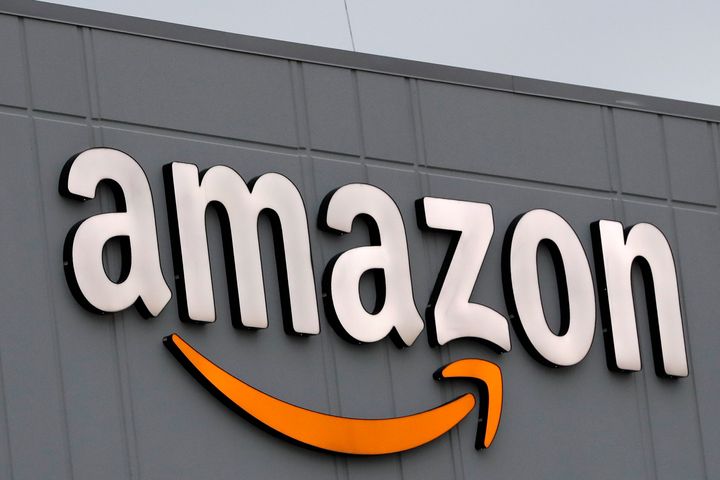 ASSOCIATED PRESS A sign is lit on the facade of an Amazon fulfillment center on Staten Island in New York. The company plans to hire another 100,000 new workers in their fulfillment centers to fill increased customer demand during the coronavirus outbreak in which many Americans are working from home and discouraged from going out.

Stephanie Haynes, a United for Respect member who works at a Joliet, Illinois, warehouse, said that after hearing a co-worker tested positive for COVID-19, she and a few colleagues confronted a human resources manager at their warehouse. They were told to go back to work and that Amazon had checked cameras to see who worked near this person.

“We didn’t find out because Amazon told us,” she said, adding that she worked with this woman. “Somebody else who worked with her, as well, came and said something.”

Amazon says its policy is to send home anyone who works closely with an infected person. Haynes was not told to go home.

“I have allergy asthma. I have family at home. I have children at home. My fiance has diabetes,” she said on the call Wednesday. “A lot of people want to go home but they have bills they want to pay. … Amazon needs to do a lot more to protect us.”

In a statement, Amazon acknowledged that a worker in Joliet tested positive. “We are supporting the individual who is recovering. We are following guidelines from local officials and are taking extreme measures to ensure the safety of employees at our site,” said the statement.

The worker who tested positive was last at the facility a week ago, the company said. Anyone who was in close contact was asked to stay home with pay for 14 days.

Amazon said it does not make cases public.

Under Amazon’s COVID-19 sick leave policy, workers get 14 days of paid sick time if they’re diagnosed with the disease or placed under quarantine. But that leaves out the raft of workers who are immunocompromised and considered at-risk under CDC guidelines. It also leaves out the many, many sick workers who can’t actually get tested for coronavirus.

Companies with similar policies have faced a raft of criticism over their restrictions.

Workers who can’t use the emergency policy are permitted to tap into whatever paid sick leave they’ve earned while working at the company. But many say they just don’t have enough hours saved up to take a meaningful amount of time off.

“I am encouraged that you have recognized the importance of paid sick leave during the current crisis,” she writes. “However, I am concerned that gaps in these policies will leave many workers without the option to follow best medical advice when they are sick, putting themselves, their colleagues, and their communities at greater risk.”

‘This Isn’t Business As Usual’

“Much of the essential work we do cannot be done from home,” Bezos said in a letter to workers earlier this week, acknowledging the difficulties of the situation. He reassured employees that their safety is his top concern, while acknowledging the enormity of the crisis and the role Amazon is playing.

“This isn’t business as usual, and it’s a time of great stress and uncertainty. It’s also a moment in time when the work we’re doing is its most critical,” he said.

The company is now prioritizing essential goods ― groceries, cleaning supplies ― over other items.

Bezos tried to reassure workers that he’s thinking of their safety.

“We’ve implemented a series of preventative health measures for employees and contractors at our sites around the world — everything from increasing the frequency and intensity of cleaning to adjusting our practices in fulfillment centers to ensure the recommended social distancing guidelines. We are meeting every day, working to identify additional ways to improve on these measures,” he said.

This isn’t business as usual, and it’s a time of great stress and uncertainty. It’s also a moment in time when the work we’re doing is its most critical. Jeff Bezos, in a letter to Amazon employees

The mask shortage is a known issue, Bezos writes. But, he says, medical workers come first. “When our turn for masks comes, our first priority will be getting them in the hands of our employees and partners working to get essential products to people,” the letter notes.

He points out that the company plans on hiring 100,000 more workers to deal with the demands of the crisis.

A spokesperson emphasized that the company’s policies are evolving along with the public health crisis.

The epidemic is clearly a breakout moment for Amazon. Workers say the level of work right now is similar to the Christmas rush. And they also understand that they’re performing a clearly essential service right now, enabling much of the country to shelter in place and slow the spread of the virus.

Still, employees say Amazon needs to do more. Not only do they need more protective equipment, but they say Amazon should proactively be checking worker temperatures before letting them start work, and that warehouses should be closed for cleaning after an outbreak. They also want real paid sick leave.

At this point, many workers have just stopped showing up at the warehouses.

Worm, who works in Staten Island, says employees are coming from all five boroughs for their warehouse shifts, traveling through a city that is experiencing a heartbreaking number of cases and deaths and potentially further spreading disease. For the good of the city and the country, he thinks the company should just close the facility where he works: “This is New York City. This is the epicenter. We are in the epicenter of this virus and they are not taking it seriously.”

A HuffPost Guide To Coronavirus

Tucker Carlson: Coronavirus — How badly is the COVID-19 crisis hurting...

Flood Warning issued March 28 at 9:24AM CDT until further notice...