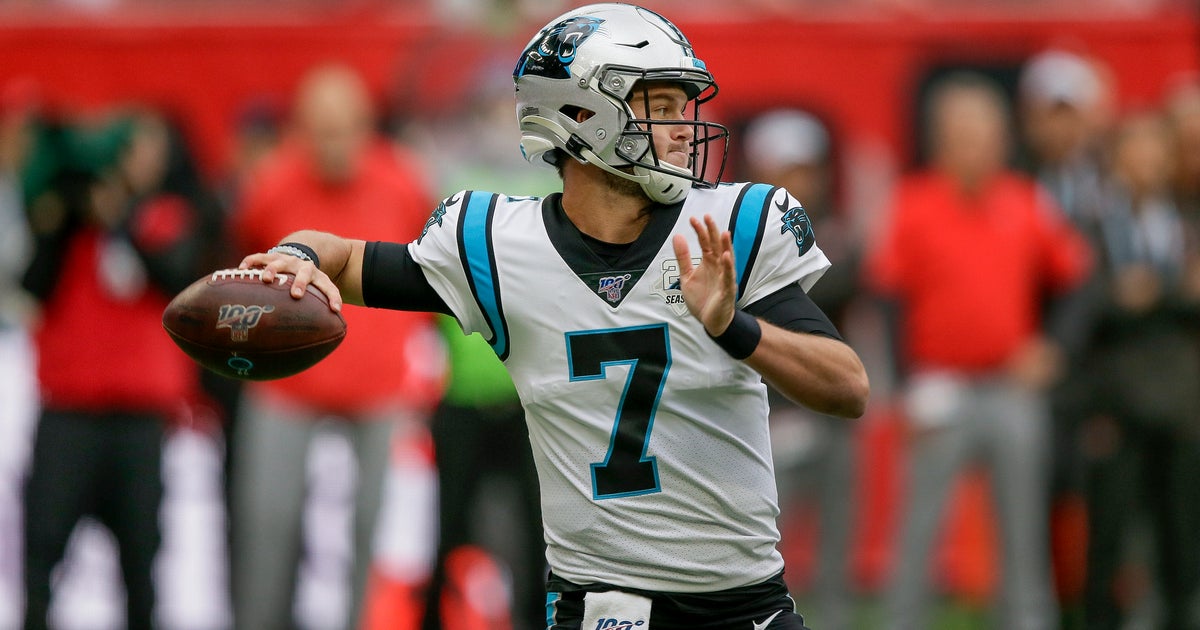 Allen started out as a nice story — an undrafted QB who beat Arizona on the road in Week 3 to help the Panthers stop the losing after starting 0-2 at home under Cam Newton.

But after leading the Panthers to four straight victories it’s hard not to wonder if Carolina isn’t better off sticking with Allen even when Newton is healthy enough to play.

On the surface that sounds ridiculous given Newton was the league MVP four years ago. But Newton hasn’t been himself in a long time. He’s lost eight straight starts. Allen, on the other hand, is 5-0 as an NFL starter, including 4-0 this season.

Allen efficiently completed 20 of 32 passes for 227 yards and two touchdowns on Sunday to lead the Panthers to a 37-26 win over the Tampa Bay Buccaneers in London.

In four starts Allen has completed 65.6 percent of his passes for 901 yards with seven touchdowns and no interceptions and a 106.6 quarterback rating, which ranks fifth in the NFL behind only Russell Wilson, Patrick Mahomes, Kirk Cousins and Deshaun Watson. Allen is the first NFL quarterback in history to win his first five starts without throwing an interception, although he has turned the ball over four times on fumbles.

So, the question becomes whether Rivera should reinsert Newton into the starting lineup once he’s healthy enough to play. The Panthers have a bye week coming up, giving Newton extra time to rest before the next game Oct. 27 at San Francisco.

A few weeks ago, Rivera said it was Newton’s job when he returned, but the ninth-year coach wasn’t ready to discuss hypotheticals after Carolina’s latest win.

“Quite honestly, I don’t answer the question,” Rivera said. “I’m not going to worry, speculate on anything until I have to address that. Until then, we’re going to stay in the now, focus on what we’re doing right now. Again, as far as I’m concerned, we’re just not going to deal with the question until it’s time. … (Newton) is in his rehab program, doing his program. Our quarterback right now that has been playing for us is Kyle. We’re not going to address it.”

At least for now, it appears to be Allen’s team — and deservedly so.

Carolina’s defense has been nothing short of fantastic during the team’s four-game winning streak, racking of 23 sacks and 14 turnovers — eight on interceptions and six on fumbles. They flustered Jameis Winston all day on Sunday, forcing five interceptions while sacking him seven times. Carolina got a great push inside the tackles with Gerald McCoy, Vernon Butler and Dontari Poe combining for 5½ sacks.

The Panthers struggled on third down conversions against the Bucs, converting only 3 of 15 attempts. Still, they managed 37 points.

James Bradberry continues to make a case for being one of the top cornerbacks in the league. Bradberry intercepted Winston twice on Sunday and blanketed his receiver most of the game. Bradberry is rarely out of position and his techniques are near flawless. He has not allowed a touchdown pass this season and limited receivers to 190 yards in six games, according to Pro Football Reference. Bradberry, who is counting just $1.2 million under the salary cap is setting himself up for a huge payday next season when he becomes an unrestricted free agent.

Joey Slye. After missing two field goals and an extra point the week before, Slye missed a 41-yarder against the Bucs and a 60-yard free kick with nobody rushing him. He did convert three field goals against Tampa Bay, including two from beyond 40 yards, so there’s some hope he’s getting back on track after winning NFC special teams player of the month in September.

The Panthers hope to get Pro Bowl guard Trai Turner (ankle) and cornerback Donte Jackson (groin) back from injuries after the bye week. There is no update on Newton’s status.

Christian McCaffrey continues to lead the NFL in yards from scrimmage and has scored five touchdowns in the past two games, including a nifty TD reception where he juked out a defender and stiff-armed another to get into the end zone. McCaffrey has 923 yards from scrimmage. The next-closest player is Minnesota’s Dalvin Cook with 796.

The Panthers get a week off following their trip to London. In some respects, they’d probably like to keep playing since they’ve won four straight games and are playing their best football in years. When they return from the break they have a formidable schedule going on the road to face the 49ers on Oct 17, hosting the Titans on Nov. 3 and visiting the Packers on Nov. 10.