It was a routine patrol around 7:30 a.m. on Sunday when six rangers working at Virunga National Park in the eastern Democratic Republic of Congo were ambushed by a local militia group. The attack is the latest in the part of eastern Congo home to some of the world’s last mountain gorillas.

“It’s devastating,” Parks Director Emmanuel De Merode told CBS News as he was leaving the funeral for one of his six rangers. “The families of these men have lost breadwinners and have no safety net.” 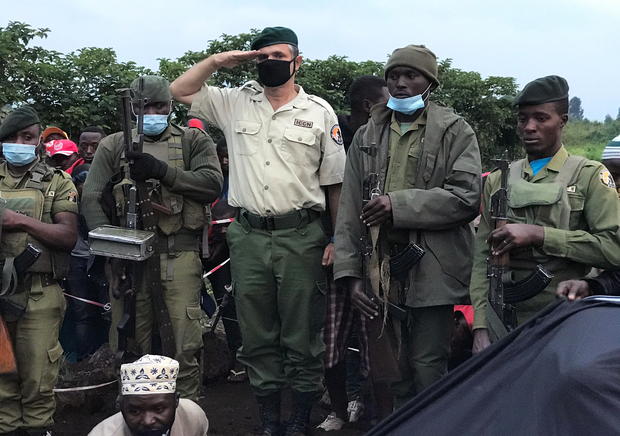 Virunga National Park rangers with Park Director Emmanuel De Merode, who salutes as he attends the burial of Burhani Abdou Surumwe, a ranger killed in an ambush in Virunga National Park, a sanctuary for endangered mountain gorillas, in Goma, eastern Democratic Republic of Congo on January 11, 2021. STRINGER / REUTERS

And for those left behind it’s a brutal blow for morale.

The attack is the deadliest since April of last year when 17 people — 12 of them rangers — were killed in the worst episode of violence in the park’s history. De Merode himself survived an assassination attempt after being shot several times in the chest and abdomen in 2014.

The Congolese Institute for Nature Conservation, the agency that manages protected areas in the country, says the latest attack occurred while rangers were patrolling the central sector of the park, near a newly constructed electric fence meant to prevent intrusions into the protected area. Rangers have been extremely successful with it — it’s kept the militia out of the area — but that success has put a target on their heads.

The armed fighters were not poachers, but militiamen battling for control over natural resources and land.  Park rangers are frequently attacked as part of the ongoing war for power in the eastern part of Congo. Dozens of armed groups operate in the region, many remnants of militias that fought in the civil wars over the past three decades that have resulted in millions of deaths from conflict, hunger and disease. 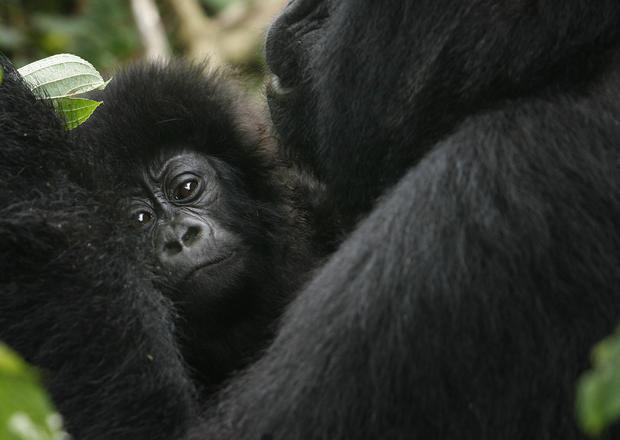 In this November 25, 2008 file photo, a baby gorilla is held by an adult in the Virunga National Park, near the Uganda border in eastern Congo.  Jerome Delay / AP

Militia groups hiding out in the Virunga Forest believe the parks have taken too much land for animals and conservation — land they need to survive. But it’s not hand-to-mouth survival — the Virunga Forest is rich in natural resources such as charcoal, forests, fishing from the lake, animals and land. De Merode said that this is a lucrative business for the militia.

“The park is very rich in resources and we lose about $170 million a year with these illegal activities,” he said. “That’s what draws the militia to the park. Our job is to protect the park but that also means cutting them off from large sums of money and brings them into frequent conflict with rangers whose job it is to protect the reserve and its flagship species, the mountain gorillas.”

The attack has been blamed on the Mai-Mai, an umbrella term that refers to the numerous militias waging armed conflict in the region. They fund their activities with the illegal plundering of resources and are small but well armed.

The Virunga Game Reserve is one of the Africa’s oldest parks, home to stunning landscapes, incredible biodiversity and, of course, the majestic mountain gorilla. The park provides a rare opportunity to see these creatures up close.

Before the global coronavirus pandemic, the park was well on its way to becoming an economic asset. In a bid to reduce the violence, authorities have created about 12,000 jobs, and at least 11% of these new employees are former militiamen. Authorities hope that if they can give fighters a sustainable job, it can put an end to the conflict.

But the parks have suffered a series of devastating blows in the past few years:  a recent Ebola outbreak, the coronavirus pandemic and now another brutal attack. The lack of tourism from this deadly cocktail of events has decimated the industry. De Merode said he doesn’t know how much longer they can hold on financially.