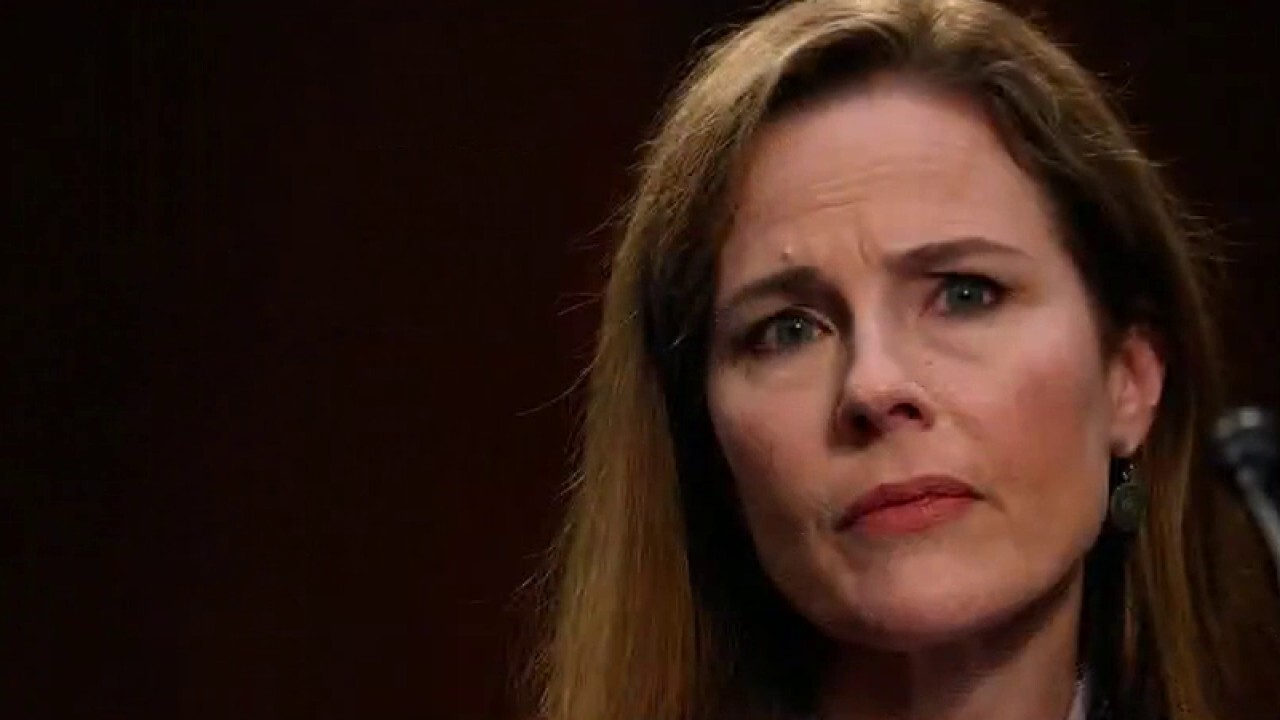 Democrats again continued to amplify their worries that the Supreme Court nominee would vote to overturn the Affordable Care Act.

Sen. Dianne Feinstein, D-Calif., tried her luck from an angle of severability.

Barrett’s answer may indicate that she could be receptive to arguments by blue states that if one part of the ACA is ruled unconstitutional, the rest of it should stand.

“I think I can say without expressing disagreement or agreement for the reasons I said yesterday not being able to grade precedents … even by Justice Scalia’s view the issue would be different in California v. Texas for two reasons,” Barrett said. “One, Justice Scalia thought two provisions of the [law] were unconstitutional. So if you picture severability being like a Jenga game, it’s kind of if you pull one out … will it all stand or if you pull two out will it still stand?”

There is only one potentially unconstitutional provision at issue in California v. Texas.

“I think the doctrine of severability as it’s been described by the court serves a valuable function of trying not to undo your work when you wouldn’t want a court to undo your work. Severability strives to look at a statute as a whole and say ‘would Congress have considered this provision so vital that — kind of in the Jenga game, pulling it out — Congress wouldn’t want the statute anymore?'”

“I’m really impressed, thank you,” Feinstein told Barrett on her definition of severability.

2. Barrett snaps back after Blumenthal insists people might be scared to use birth control because of her

“I would like you to keep in mind how many people are listening and watching because they may take a message from what you say and they may see what you say and decline from using contraceptives or may feel they could be banned,” Sen. Richard Blumenthal, D-Conn., told Barrett.

“I would be surprised if people thought that birth control would be criminalized,” the judge replied.

Blumenthal then said people are scared that marriage equality will be “cut back” and that their relationships could be “criminalized.”

“To suggest that’s the kind of America I want to create isn’t based on any facts in my record,” Barrett said.

Barrett later declined to tell Sen. Chris Coons, D- Del., whether the 1965 case Griswold v. Connecticut, which protects the right of married couples to purchase contraception, was correctly decided, but she did say the question was likely to be largely academic as the precedent was unlikely to be challenged.

3. Cameras in the court?

Iowa Republican Sen. Chuck Grassley, who has long pushed for more visibility in the high court’s proceedings, asked Barrett about her thoughts on live-streaming court proceedings.

Barrett told Grassley she’d “keep an open mind” about getting cameras in the court, by far the most elusive branch of government.

4. Barrett reminds Democrats: ‘I have my own mind’

Barrett again had to assert her own judicial independence, separating herself from even late Justice Antonin Scalia, for whom she clerked.

Since Barrett admittedly prescribes to the same originalist judicial philosophy that Scalia championed, Democrats claim that Scalia’s past votes against Obamacare, gay marriage and the Voting Rights Act would be hers too.

“I assure you I have my own mind,” she said.

But under questioning from Coons, Barrett told the senator it’s unfair to expect that she would decide a case just as her mentor had done.

“I hope that you aren’t suggesting that I don’t have my own mind,” Barrett said, “or that I couldn’t think independently or that I would just decide like, ‘Let me see what Justice Scalia has said about this in the past.'”

BARRETT TELLS DEMOCRATIC SENATOR: ‘I HOPE YOU AREN’T SUGGESTING I DON’T HAVE MY OWN MIND’

Nevertheless, Coons said he planned to vote against her.

“My core concern here, your honor, is that your confirmation may launch a new chapter of conservative judicial activism, unlike anything we’ve seen in decades,” Coons said. “And so with all due respect, I will be voting against your confirmation.”

5. Harris asks Barrett if she believes coronavirus is infectious and smoking causes cancer

“Do you accept that COVID-19 is infectious?” Sen. Kamala Harris, D-Calif., asked.

“Do you accept that smoking causes cancer?” the California Democrat continued.

“I’m not sure where exactly you’re going with this but… Sen. Harris yes every package of cigarettes warns that smoking causes cancer,” the judge said.

“Do you believe that climate change is happening and is threatening the air we breathe and the water we drink?” Harris asked.

Barrett responded: “Senator, again, I was wondering where you were going with that, you have asked me a series of questions that are completely uncontroversial like whether COVID-19 is infectious, whether smoking causes cancer and then trying to analogize that to eliciting an opinion from me that is on a very contentious matter of public debate.”

She said she would not answer questions of policy.

“I will not do that,” she said. “I will not express a view on a matter of public policy, especially one that is politically controversial because that’s inconsistent with the judicial rule as I have explained,” she continued.

Harris responded: “Thank you, Judge Barrett, you’ve made your point clear that you believe it is a debatable point.”

Sen. John Kennedy, R-La., seemingly mocked Harris’ line of questioning, though he asserted she was a “good friend.”

“Are you a racist?” Kennedy asked.

“I am not a racist, Sen. Kennedy,” Barrett said.

“Do you support in all cases, corporations over working people?” Kennedy asked.

“Do you hate little warm puppies?” he added.

Barrett laughed: “I do not hate little warm puppies.”

NFL could push back Super Bowl 'as far as 4 weeks' if necessary, Packers CEO says

Steve Bing worth $300K at time of his death despite $600M inheritance: reports

Phil nervous about fans at event before Masters