HARRISBURG, Pa. (WTAJ) — The Pennsylvania Department of Health has confirmed 1,566 new cases of COVID-19 since yesterday, bringing state totals to 179,086.

According to the DOH, 25 additional COVID-19 related deaths have been reported, bringing the total to 8,457.

Eighty percent of Pennsylvania cases have been considered recovered from COVID-19.

A total of 7,340 cases of COVID-19 have been confirmed in our Central Pennsylvania region. Our region is showing 158 more cases than yesterday.

You can find the county by county breakdown below: 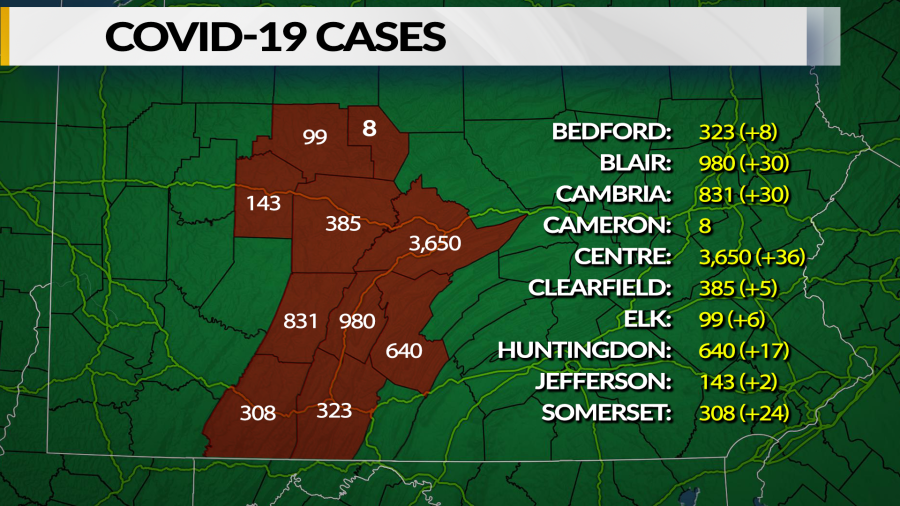 The Pennsylvania Dept. of Health announced they will no longer update the COVID-19 Dashboard on Sundays. Monday’s numbers will now reflect results reported for Saturday and Sunday.

The department is seeing significant increases in the number of COVID-19 cases among younger age groups, particularly 19 to 24-year-olds. An alert was sent to healthcare providers about the changing COVID-19 case demographics, as there are more cases in younger age groups than in those 50-64 and 65+. The following regions saw significant increases among 19 to 24-year-olds in each month from April to present in October:

In nursing and personal care homes, there are 24,334 resident cases of COVID-19, and 5,342 cases among employees, for a total of 29,676 at 1,015 distinct facilities in61 counties. Out of our total deaths, 5,603 have occurred in residents from nursing or personal care facilities.

Approximately 11,559 of our total cases are among health care workers.